The city of Orange holds the best-preserved Roman amphitheater in the Western world. 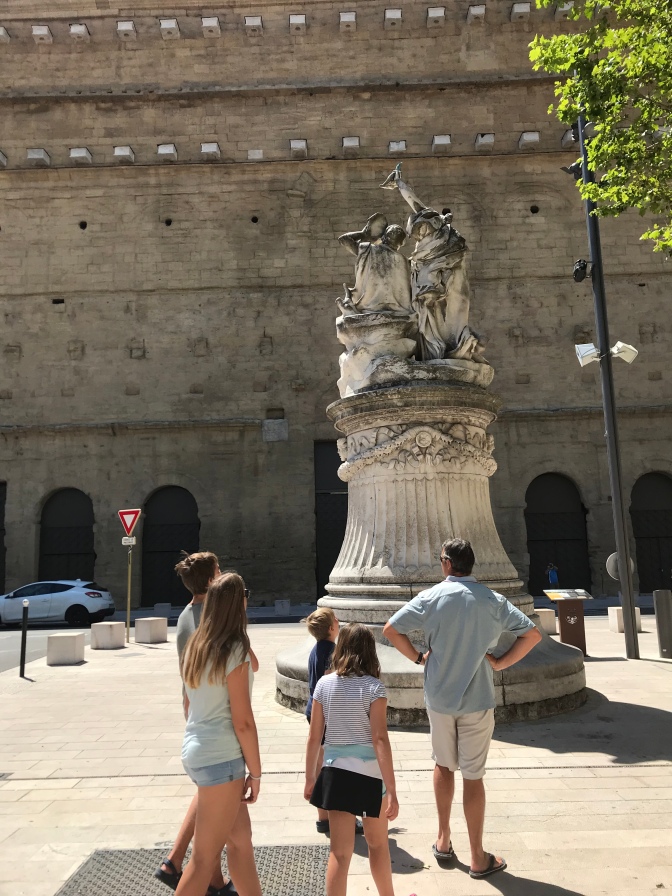 Going to the theatre was a popular pastime for ancient Romans. Performances were intended to educate spectators and to spread Roman culture, as well as to entertain. 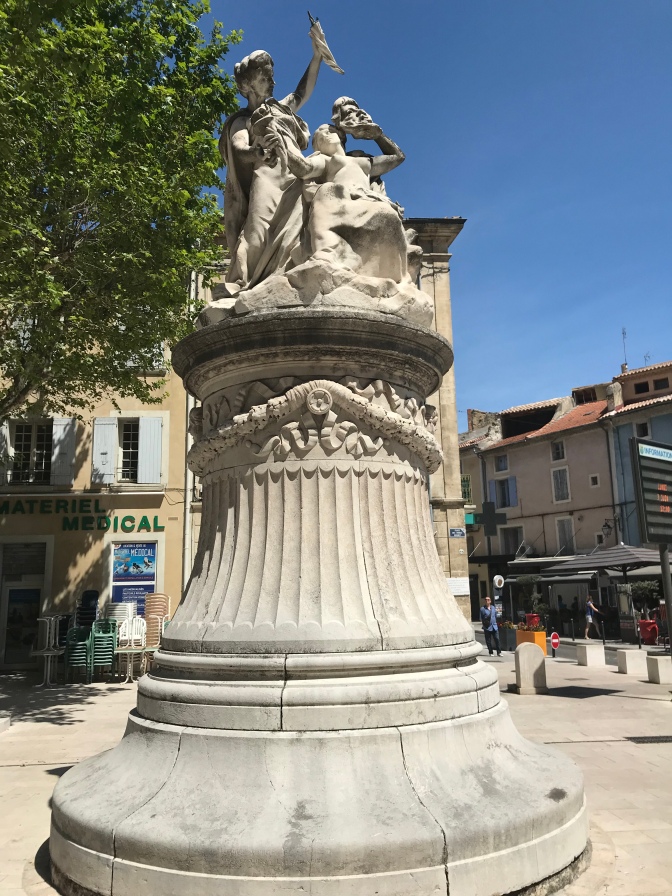 The most popular plays were: “la comédie” (the comedy); “la tragédie” (the tragedy); and the pantomomime. 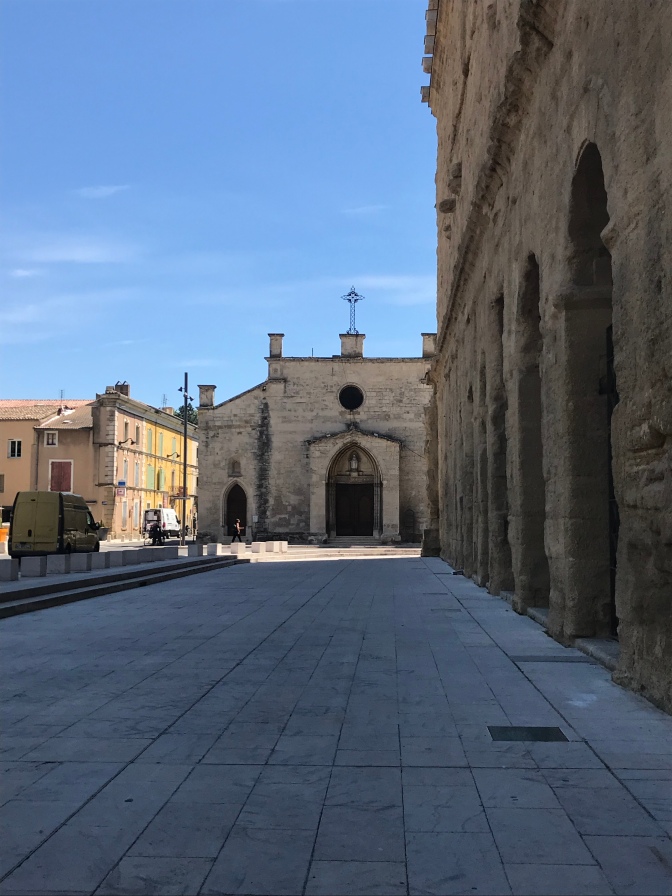 The Romans conquered the Gauls in 36BC and (as was also the case in other cities) built a forum, a temple, thermal baths and this theatre to make Orange more Romanesque.

The “Théâtre Antique d’Orange” was built early in the 1st century BC, under the rule of Emperor Augustus.

It was listed as a French National Monument in 1862 and was declared a UNESCO “patrimoine mondial” (World Heritage Site) in 1981.

The impressive stage wall was built using yellow and white limestone from a local quarry. 16 centuries later, King Louis the 14th proudly declared it: “La plus belle muraille de mon Royaume” (The most beautiful wall in my Kingdom). It stands 103m long and 37m high!

Our audioguide informed us that to this day, “spectacles” (shows) such as “l’opera” “comédies musicales”, “la danse” and “les concerts rock et pop” are still performed here.

Early audiences would have expected the actors to perform certain customs and gestures in order to understand the meaning of the plays.Pantomimes were predominantly silent meaning that, in order to make themselves understood, the actors’ artistry had to be impeccable. There were fourteen hand positions that had to be performed perfectly in order for the audience to keep up with the plot.

Masks were commonly worn to depict characterisations. Large ears reflected malice; palour was used to portray illness or immorality and red cheeks were for love and romance. Likewise slaves could be identified by their red wigs; the elderly, by white wigs and blonde wigs represented youth or foolishness. Even their attire and the way their robed were draped were emblematic of their emotional state.

Sadly, as non-citizens, these traveling “histrions” (story-tellers) were considered outcasts and ostracised by society. In spite of this, some became wealthy and famous and scandalously managed to wangle their way into classy cohorts.

The semi-circular arena, known as “cavea” (terraces) was carved into a hillside called Saint Eutropius. This served to make the structure more sound as well as to lower the cost of building.

Up to 10,000 spectators can be seated in the hemicycle.

In Roman culture, the theatre was open to all and “gratuit” (free of charge) but by no means could the socio-economic groups “se mélanger” (mix). Low walls were placed between seating areas and separate entrances and stairways were provided for the purpose of keeping the classes separate,

The first three rows, directly in front of the orchestra, were reserved for wealthy aristocrats – the town’s “crème de la crème”. Behind them, sat “les marchands et artisans” (merchants and artisans). Then came the “plebeians” (plebs/common folk) and right at the back, the “polarités” made up of slaves, beggars and prostitutes.

The doors in the wings of the stage allowed for vehicles, such as horse-drawn chariots, to enter the action. The wooden stage floor was originally overlaid with marble. The columns and statues of the facade in front of the wall were also made of marble.

Below is an historian’s impression of what the amphitheater would have looked like when it was first constructed.

Notice the intricate detail of the marble facade in front of the stage wall. Take note also of the walls separating the seating areas.

The original wooden roof was destroyed in a fire; most likely as a result of the lively practice of attracting audiences by using “effets spéciaux” (special effects) such as lighting real fires on stage. In 2004 a new roof was constructed out of 200 tons of glass and steel! The architect’s mandate was to create a roof that cast no shadows; to enhance the acoustics; to protect the wall from further weathering; to allude to the ancient atmosphere and to be aesthetically pleasing… Whew!! What an undertaking.

Marble statues of the reigning emperor were a-dime-a-dozen, back in the day. Hundreds of them were made in Rome and sent out wherever they were needed. They were designed so that their heads could be removed and interchanged every time a new emperor came into power – quite literally – ‘off with his head’!

Behind the seating area were passages and caves known as “ambulatories”.

Here, Patrons could escape the heat of the day and purchase refreshments.

In 337, Constantine converted to Christianity and outlawed the public performances. Across the empire, theatres were either turned into churches, destroyed or left to decay; as was the case with this one in Orange. It was later used as a prison during the French Revolution. 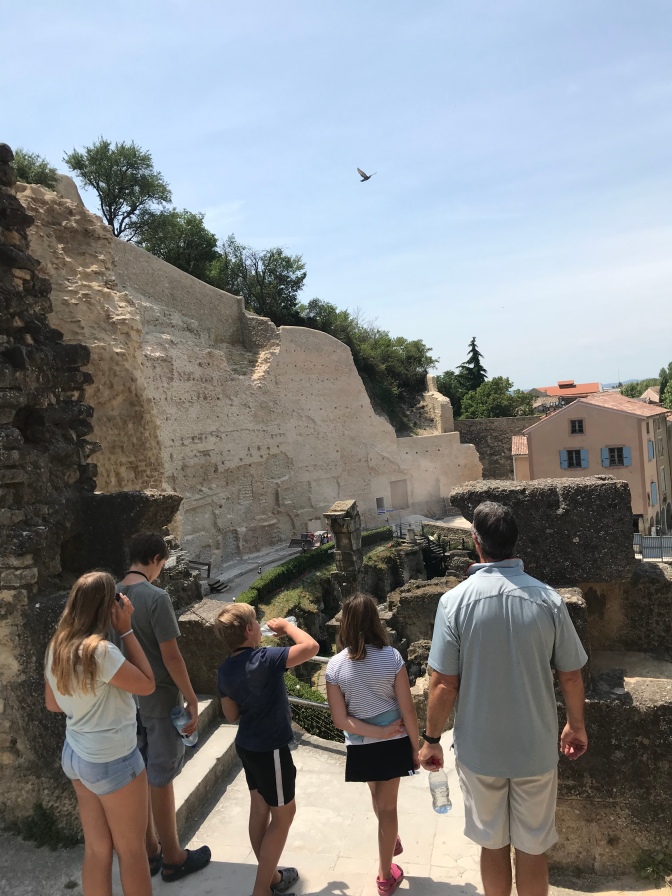 Just next to the amphitheater lie the ruins of an ancient temple. 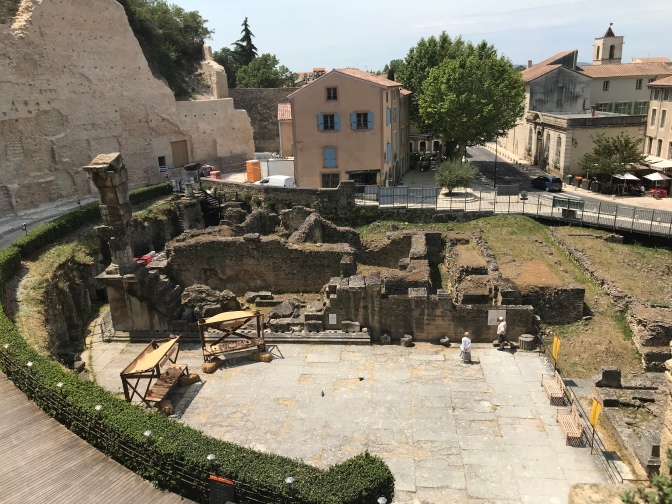 Archeologists surmise that it is a 2nd century construction, created in honour of the emperor (possibly Antoninus-Pius who ruled Rome from 138 until 161). Emperors were worshipped as deities once they had died and experienced, what the Romans believed to be, an “apothéose” (apotheosis – transformation into a god).

Pottery and board games were found within the temple ruins.

The actual artefacts are kept in the local museum but these replicas are on display on site.

Here are a few more pretty sights we saw in Orange:

For lunch, I managed to to convince the troop to try a restaurant that served pukka Provençal-fusion fare. 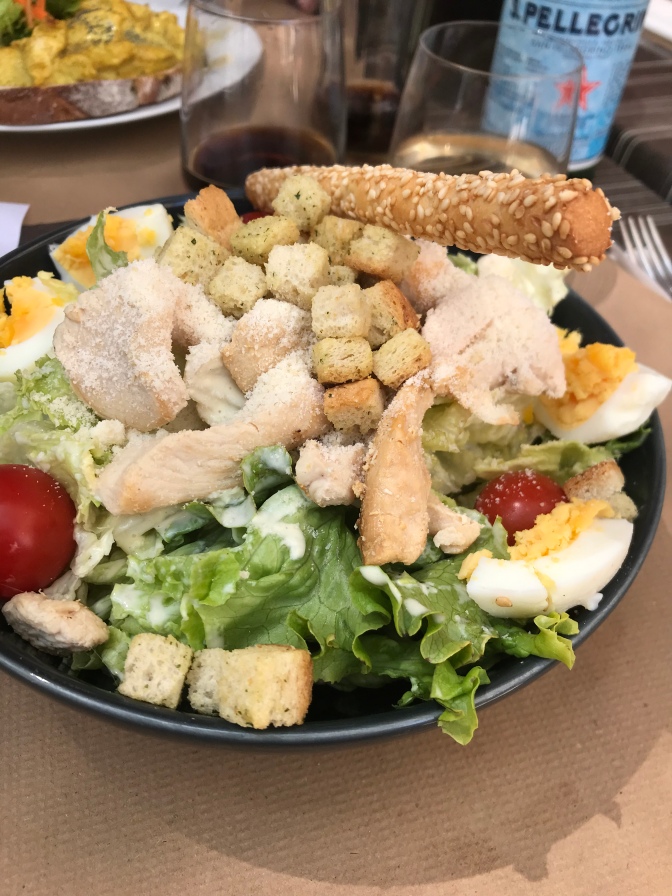 And a truly Roman “salade César” (Caesar salad) “pour moi” (for me).

I deem it a real privilege to be able to access these doorways into ancient civilisations.

One thought on “Roman Remains”