A storm accompanied us all the way to the coast. 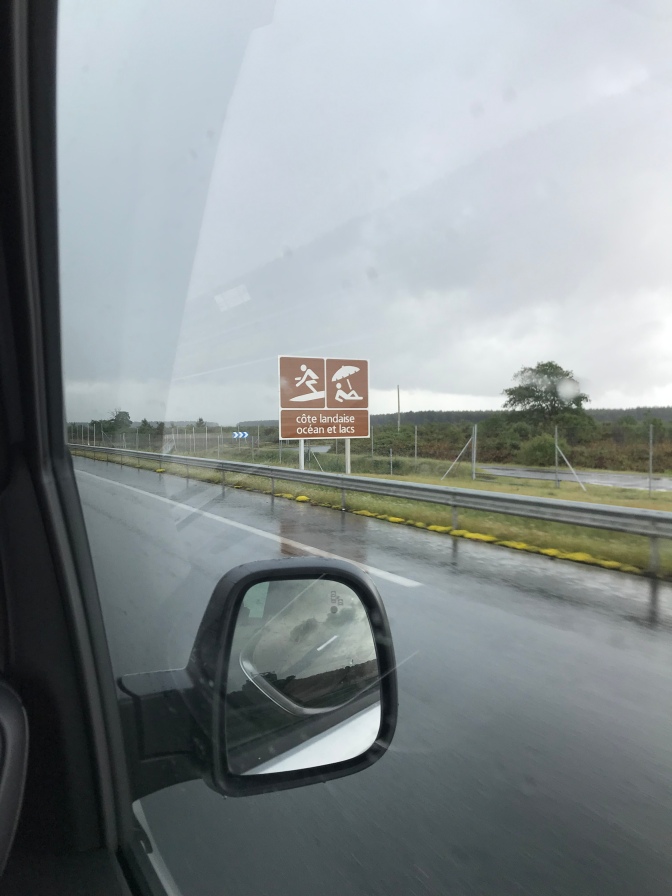 It looked very much like our week of surfing and sun-tanning would be a washout! 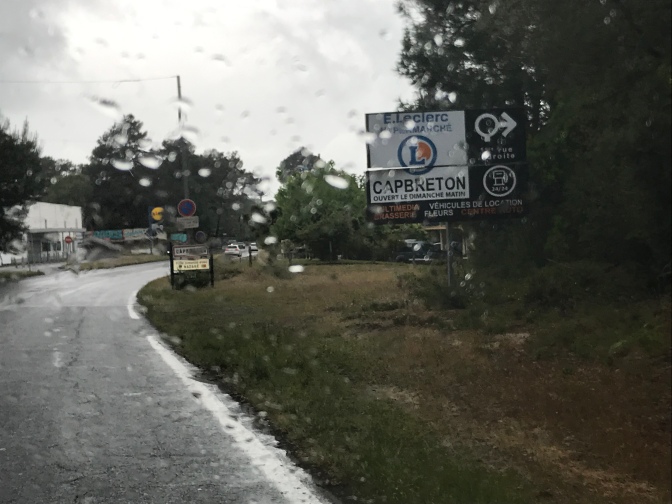 An alert from our weather App warned of strong winds and high seas. We were cautioned to stay away from the coastline – so much for soaking up the sun!

From our “appartement” on the “deuxième étage” (2nd floor) the “vagues” (waves) looked quite formidable.

We settled ourselves in and Mr B and I, armed with raincoats and umbrellas, went off in search of some food to settle our stomachs (well mine anyway – everyone else seemed to be quite chilled).

We found a little takeaway pizza place about 300m from our flat. From past experiences, we’d discovered that there are some unusual pizza toppings in France! Potatoes, boiled eggs and foie gras are not commonly found on pizza menus in South Africa. These ones had French names but were similar to the ones we’d have back home. “La Reine” (The Queen) was what we would call Regina; “Le Tropical” (Tropical) was Hawaiian and “Quatre Saisons”, Four Seasons.

We’d just left the “magasin” (shop) with our boxes of bounty when a deluge came down on us. Our umbrellas were fairly “inutile” (useless) against the strong gusts which made our dash all the more comical! I was tempted to stop and take a photo to show you but soggy pizzas would not have gone down well! 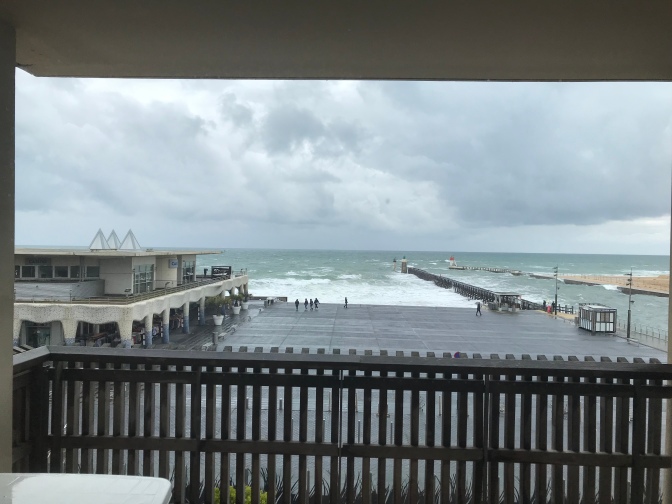 The next morning was still cold and grey but it cleared enough for an exploratory walk.

Looking back towards our building, the apartment below the blue oval was ours 🙈 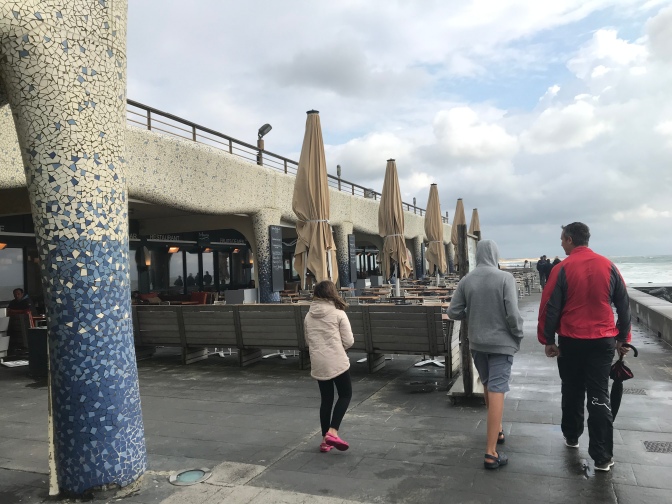 The beachfront promenade reminds me of Durban beachfront in the ’80s!

There are many restaurants and holiday rentals all along the shore. It must be very a very popular spot in summer! 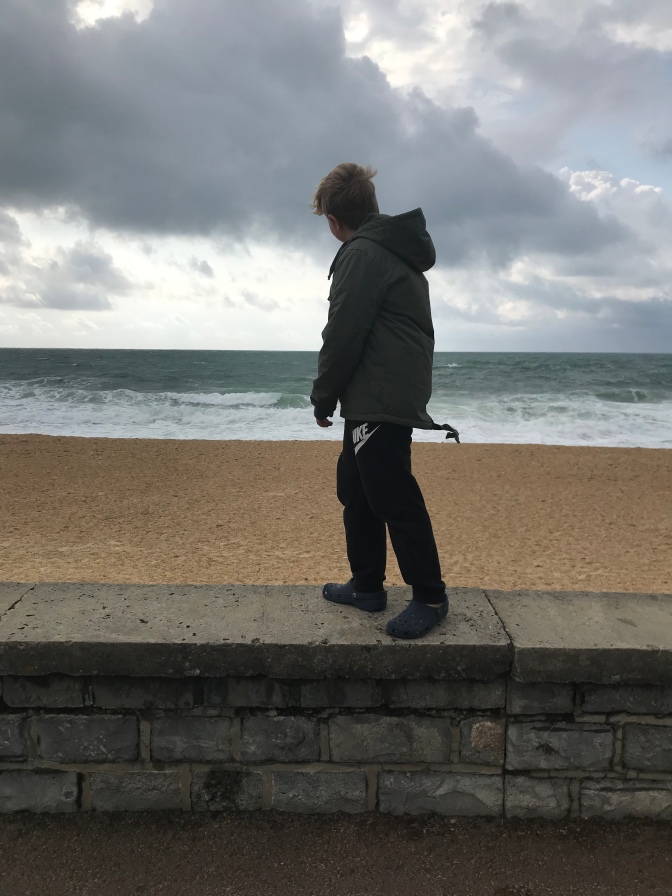 The wind was howling and the sea was rough but we enjoyed our stroll. 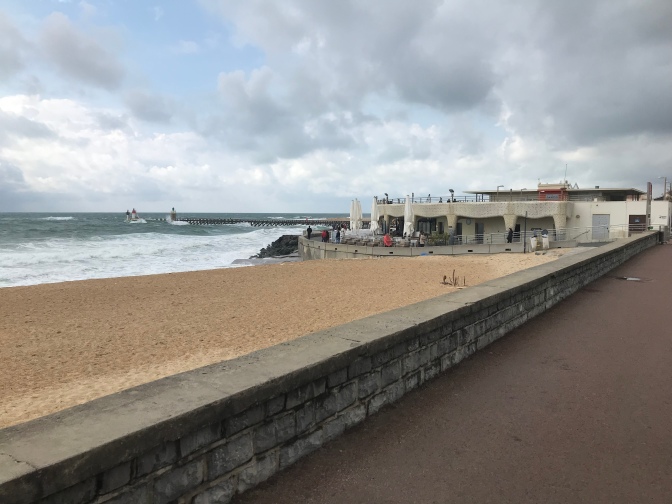 We turned around at the end of the esplanade and back towards the casino and eateries.

At the end of the day, we were chuffed with our efforts.

On Monday afternoon we thought it would be a good idea to walk to the lighthouse at the end of the pier on the other side of the port. We guessed it would take about an hour…

Little did we know, there was no direct route. 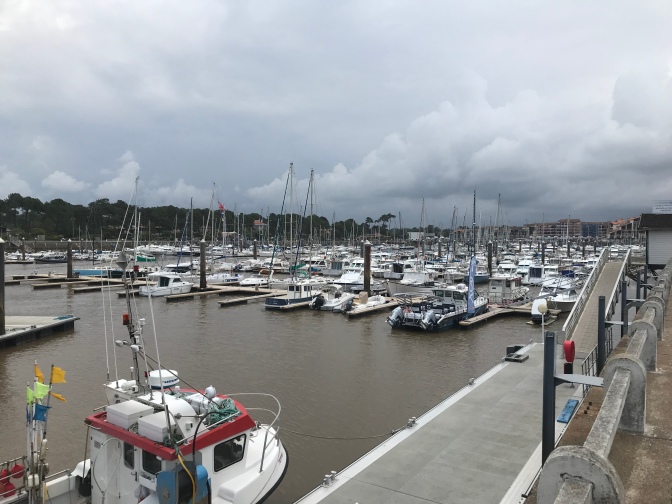 I loved the harbour with the boats all parked neatly in their bays.

I’d never before seen this clever concept: the jetties move up and down with the changing tide and long cylindrical metal posts hold them in place.

We took a picture of our building from across the canal.

Good for learning some lessons in grit!

or, at least the halfway mark! 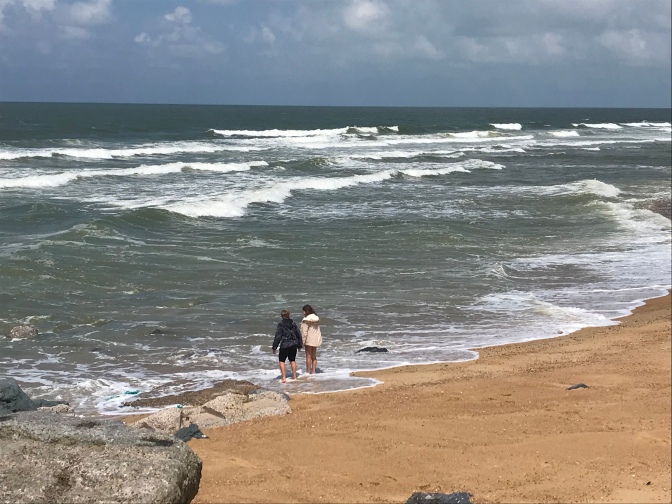 Miss K and Mr D dared to dip their toes in the ocean.

At last we set our sights on our final stage…

and set off with determination and as much cheer as we could muster.

We were rewarded with a sensational sunset and, afterwards, were soon sound asleep – not difficult to do, as the sun only went down at 9:30pm! 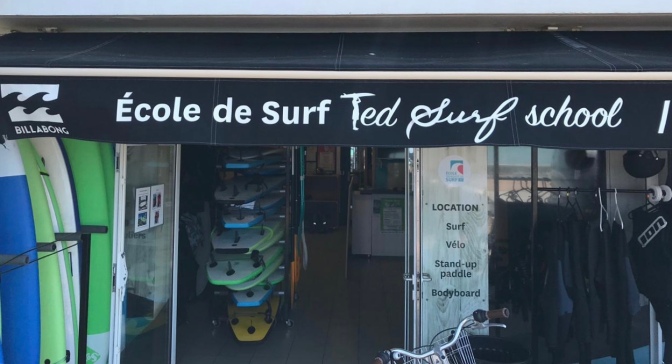 Tuesday turned out to be a lovely sunny day and we decided to give surfing a try.

It was fairly flat but we all put on wetsuits and went in for a paddle and a splash.

We walked down to the beach with all our paraphernalia only to realise that there was no way to get to the left of the rocks without getting wet. 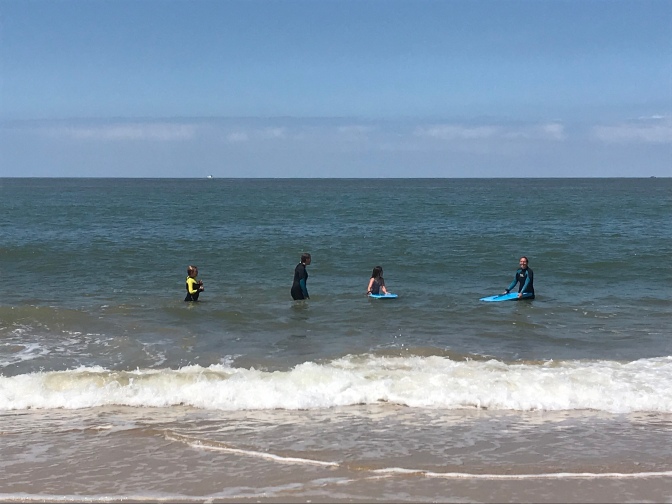 I stayed with the bodyboarders on the right and Mr B joined the surfers with Mr J. 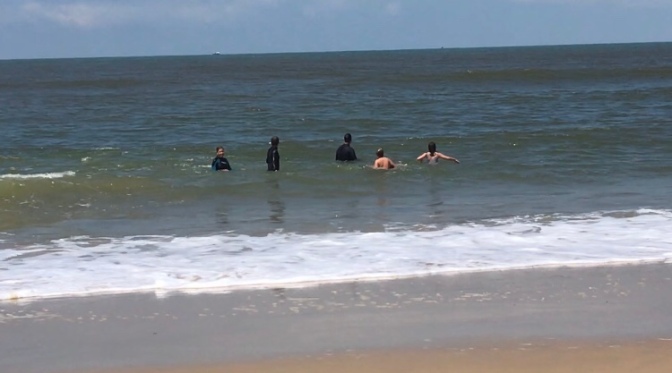 Eventually we all met up for a swim and some bodysurfing. 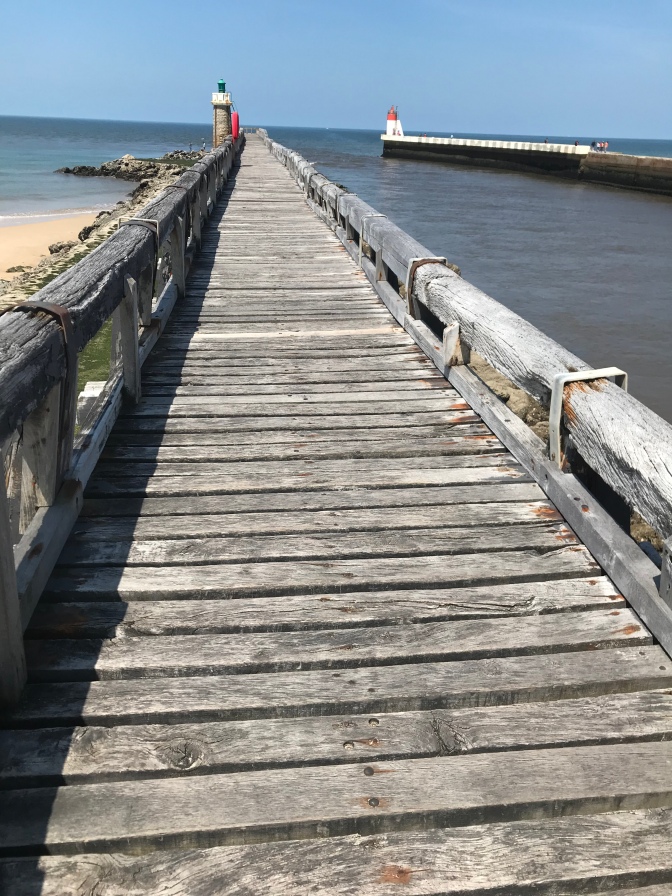 After our swim/surf we walked to the end of “L’ Estacade” on our side to snap some shots. 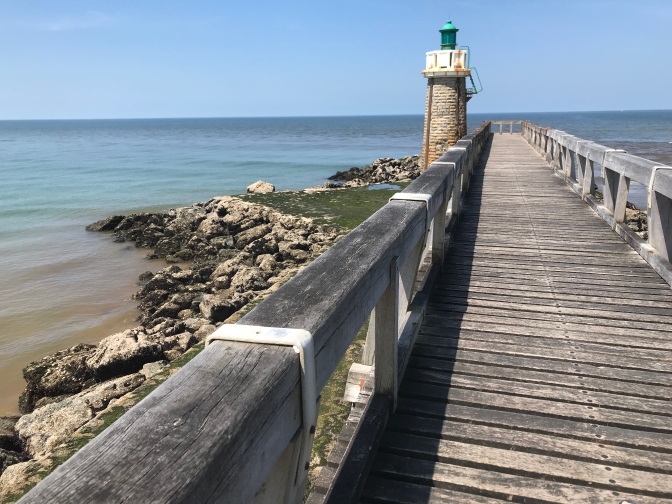 This wooden pier was originally built under the orders of Napoleon in 1858.

when an abundance of mussels can also be observed. 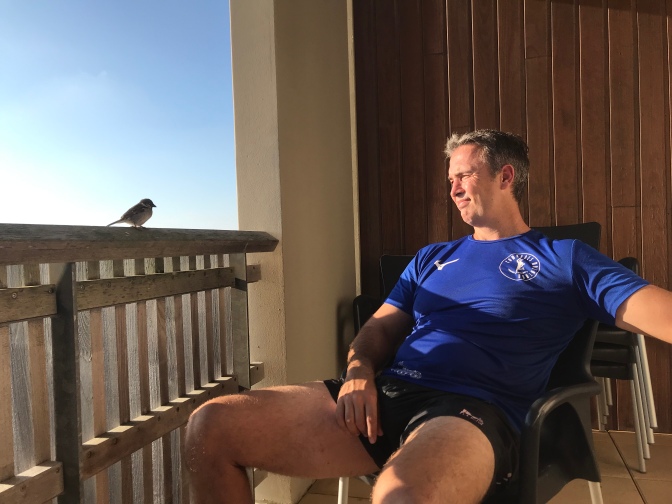 Sitting on our balcony, enjoying a sundowner, after his evening run, Mr B encountered a friendly sparrow who chirped with him for about 5 minutes before bidding us adieu.

Such a warm evening called for a crisp glass of Sauvignon Blanc. We have found that, so far, Sancerre is our favourite AOP (Appellation d’Origine Protégée).

Here I am savouring my Sancerre while three of the children challenge each other to a sunset sprint on the terrace.

Mr D and Miss K had been waiting in anticipation for Wednesday when “L’Isle aux Pirates” would be open; Mr B and I decided to kickoff the action. 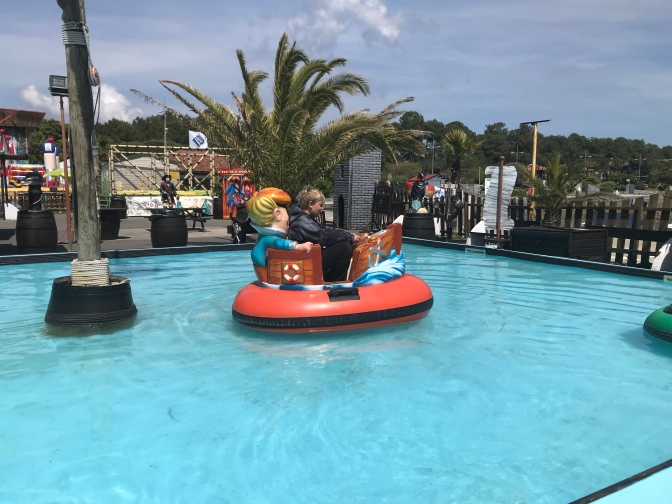 The ‘bumper boats’ as Mr D dubbed them looked more ‘dope’ than they turned out to be…but it was a pleasant bob about nonetheless. 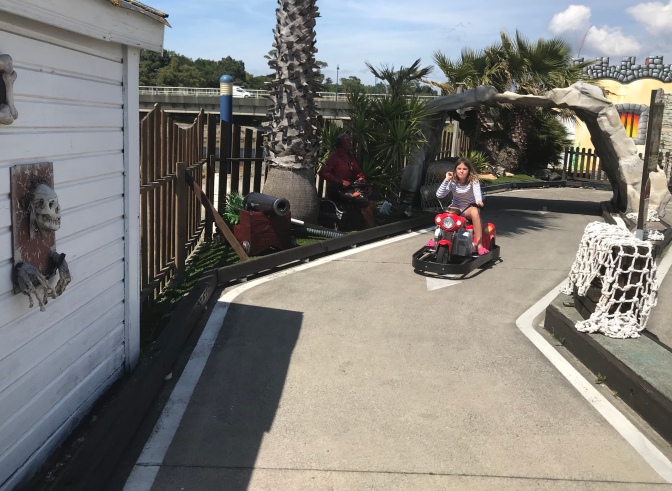 A ‘pleasant’ meander past a pirate, a canon and a skeleton …

turned into a high-speed chase when Mr D entered the arena. 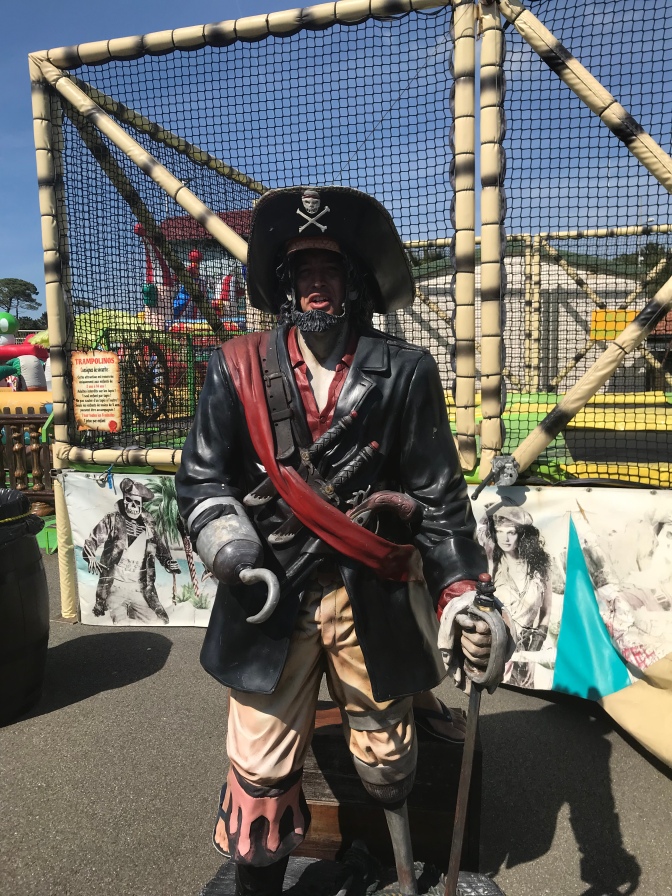 Even when pulling his ugliest face, he’s too “beau” to be a buccaneer! Without a doubt, the trampolining won for the best attraction!

Once they learned to do somersaults, they wanted loads of photos and videos.

An easy meal for the kids that night… while we walked 100m to sample some scrumptious food from the Pays Basque. 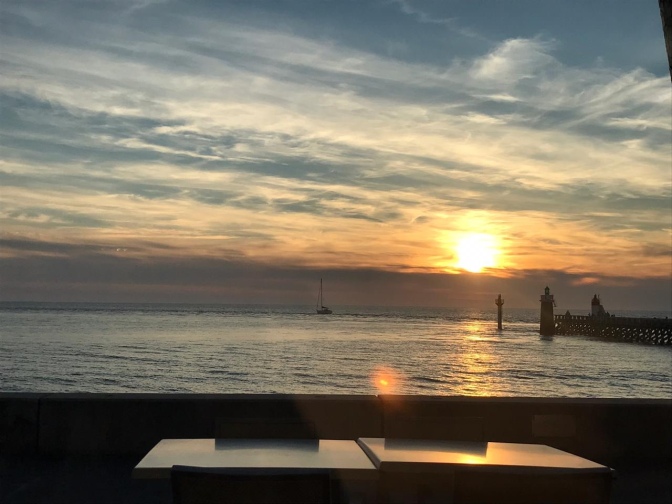 We were seated at a table overlooking the ocean.

The sun was so bright that it was necessary to wear sunglasses for the first half of the meal. 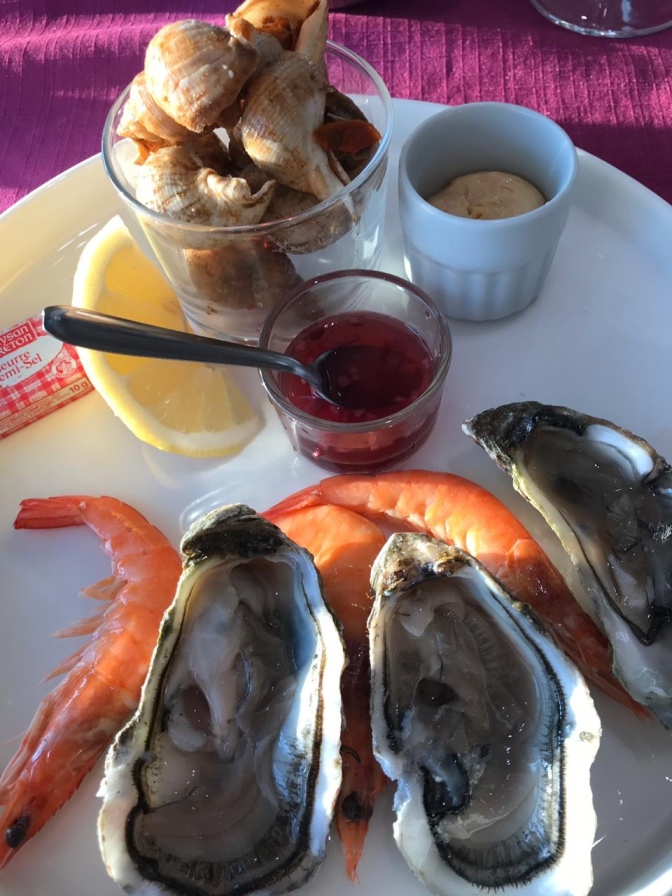 “Comme entrée” we both had an “assiete des fruits de mer” (sideplate of seafood).

“Merlu” (hake) was on the menu for mains.

And for dessert, a “Pastiza” provided by a local “patisserie”. It is a lemon sponge cake with a centre of “crème pâtissière” (custard). It was enchanting! I have the recipe and am going to try to replicate the delightful cake as soon as I have an oven at my disposal!

The morning after, unbeknownst to us, Miss K and Mr D had prepared a special surprise. We were awakened at 8am with “petit dejeuner” breakfast in bed – Nutella toast and Nutella coffee!

Our sweet (and sweetly-prepared) breakfast gave us the boost we needed for our two-hour bicycle ride.

We did a loop along the lake and through the forest…

… and back via the track we’d taken on our walk earlier in the week.

“Un petit accident” almost derailed us right at the end but we all retained home safe and sound … and marginally sane! 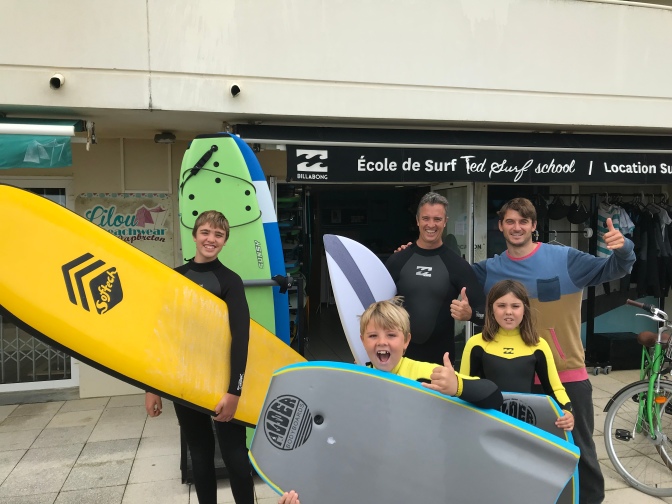 Miss R and I decided to sit this one out as the whether was a little miserable.

We were there to offer moral support … and to enjoy cappuccinos and a chin-wag on the beach. 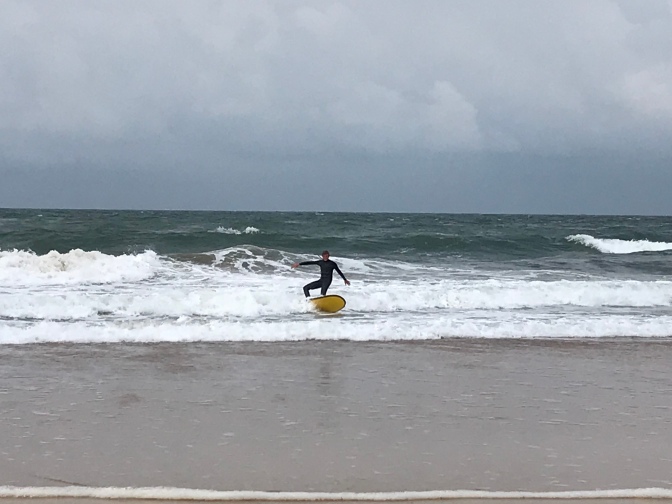 The waves were messy but Mr J got a couple of rides. 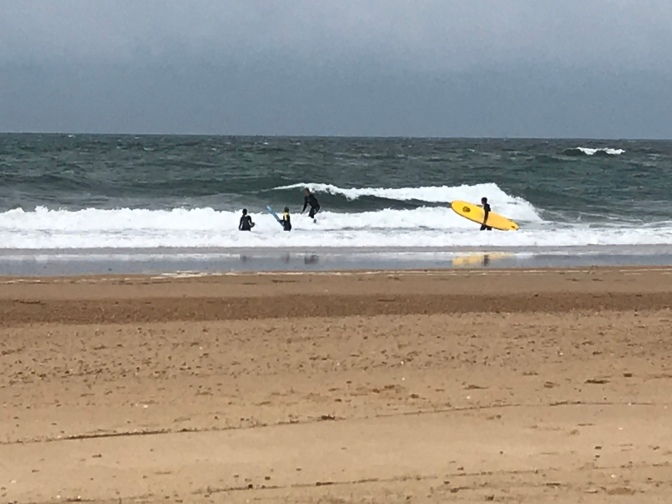 Another delicacy from the Pays Basque that we enjoyed as a teatime treat. 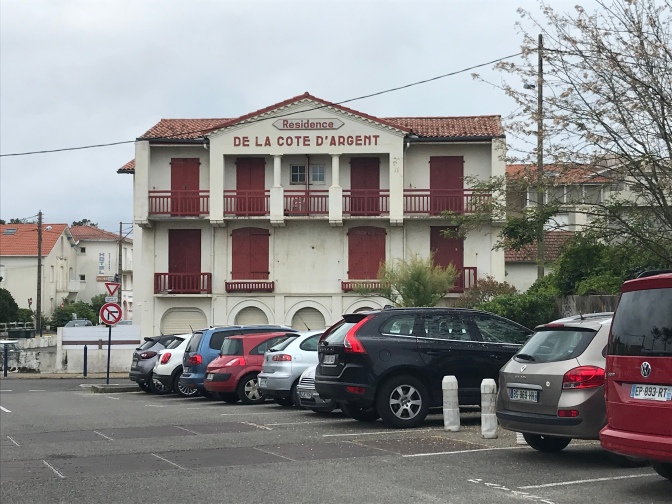 On Saturday morning it was time to bid farewell to “La Côte D’Argent” (The Silver Coast) also known as “La Côte Sauvage” (The Wild Coast).

On our way to the Catalan Coast of Collioure, we had a brief stop in Biarritz.

Some beautiful pastries were displayed. We settled for ‘cappuccinos & croissants’ and ‘pain au chocolat’ & ‘chocolat chaud’.

Even though it was a really grey day, the views were gorgeous.

and manmade marvels were magnificent.

We all felt as though we would’ve liked to have stayed longer to see what other wonders were concealed by the clouds. 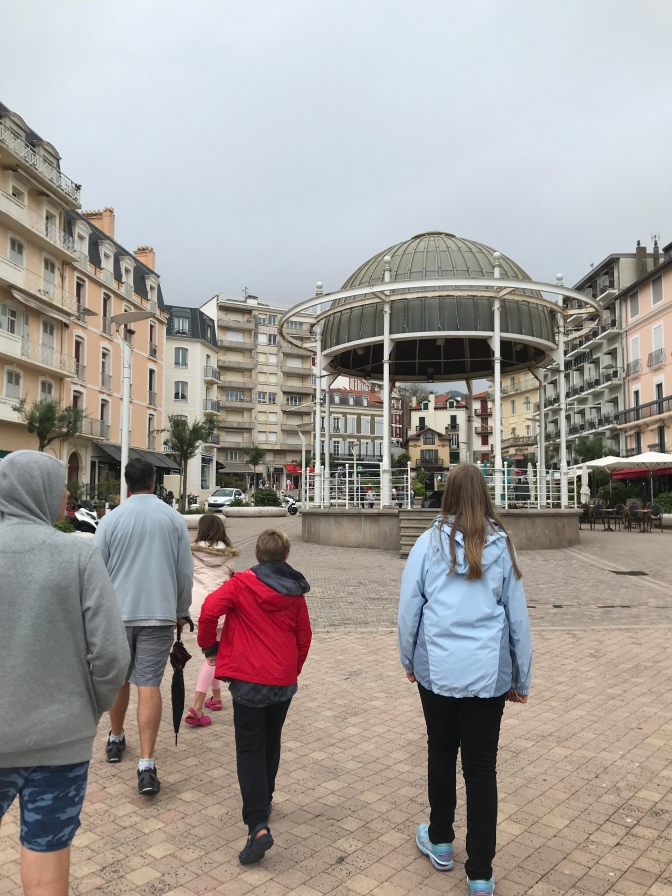 Perhaps we’ll return to surf and suntan one summer.