Château Beynac is a Feudal fortress “entre ciel et terre” (between sky and earth) that was built in the early 12th century as a result of the series of attacks on the town, imposed by the Normans and Vikings. 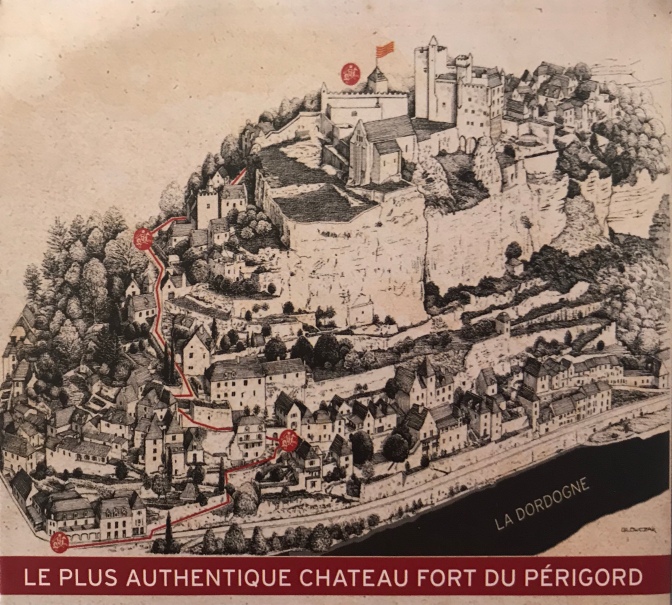 The visitor’s guide describes it this way: “Here between sky and earth, time has stopped. Perched high up on a cliff … the castle acts as a stone sentinel that has watched over the Dordogne for the past nine centuries”.

Stone tablets record the names of the barons of Château Beynac. Since the year 1115, 29 kings, lords and noblemen have won the right to occupy this prominent abode.

Being an authentic and well-preserved monument has made it a magnet for movie-makers. Joan of Arc is undoubtably the most famous of the feature films made here. The day that we visited, a set was being built for another.

When the castle was built, the Dordogne (1000km south of London) marked the boundary between France and England!

Thus, we are looking over what would have been England in the 12th century.

When King Henry 11 of England married Eleanor of Aquitaine in 1152, Château Beynac became British territory for a time.

To the east of the castle lies the Notre Dame de l’Assomption de Beynac.

This chapel still serves as a place of worship for the people of Beynac.

The castle really is austere, rising from the 150m high cliff like a knight mounted on a noble steed. It was created to defend its people from enemy invasions and from pirates; as it was an important “port de pêche” (fishing port) and “passerelle” (gateway) for barges carrying chestnuts, walnuts, wine and wood to the rest of the Périgord.

The first room we walked into was The Guard Room. It was accessible to knights and their horses (with stables located to the back left and a drinking trough; back right).

Here, sentries could keep watch or ladies could while away the daylight hours reading, writing, sewing or chatting with a friend. 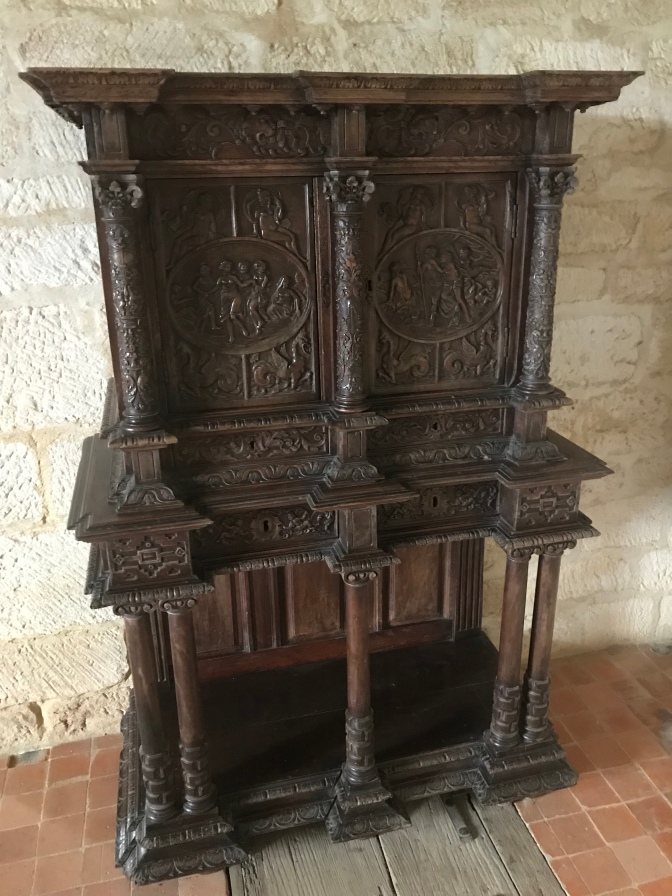 Gorgeous Gothic furniture can be found throughout. Hand-carved from chestnut, these pieces depict elaborate scenes.

Another astonishing attribute is the meticulously crafted tapestries carefully draped on selected walls.

The tapestries all detail events from daily life; though they do sometimes steer away from the ordinary, like the inclusion of an occasional unicorn for example.

Hunting and fishing in the Dordogne are popular themes. 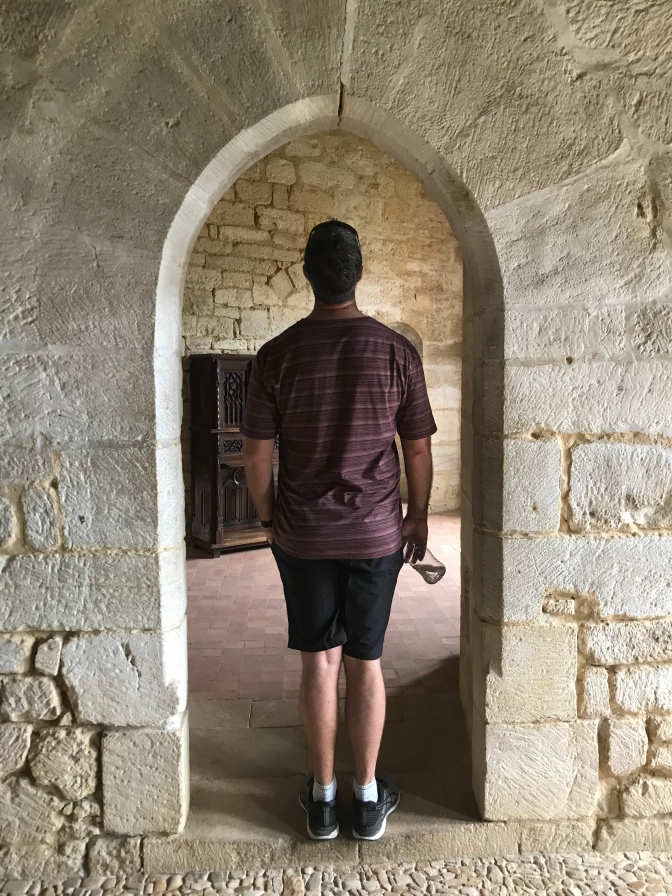 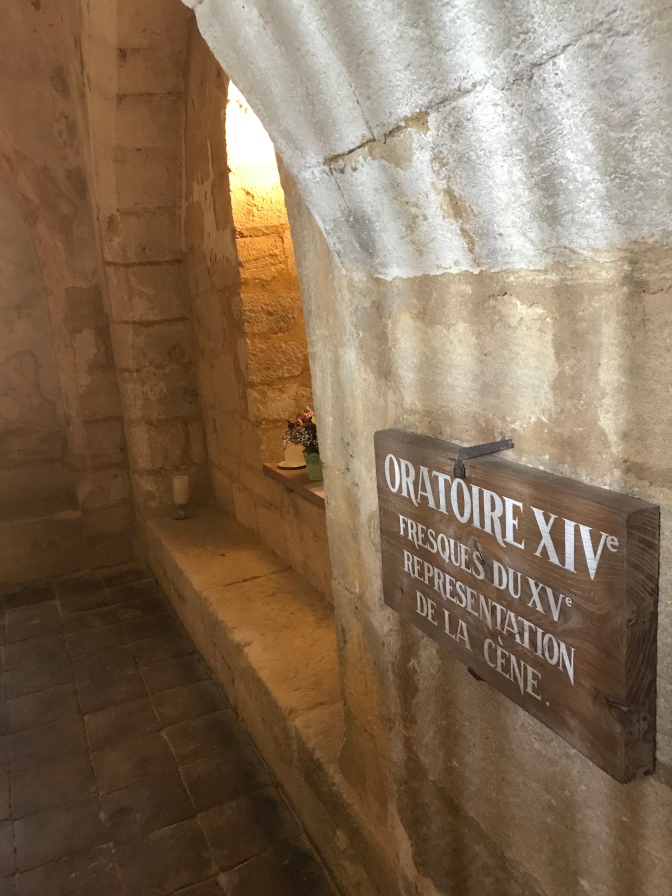 The Oratory (little chapel) is located just to the left of the State Room. It’s interesting that they felt it necessary to have a place of prayer right next to the room where the important decisions were made.

Dating back to the 14th century, it is graced with 15th century frescoes.

“La Dernière Cène” (The Last Supper) is clearly visible above the statue of the crucifixion.

The State Room strangely has no table. In bygone years important decision-makers did not repose themselves in comfortable positions but paced the floor to help them to think. It was also used as a tribunal and as a banqueting hall for entertaining guests. I imagine that tables would have had to have been brought in for those occasions.

Built in the early 1100s, Le Donjon (The Keep) is the oldest part of the castle. 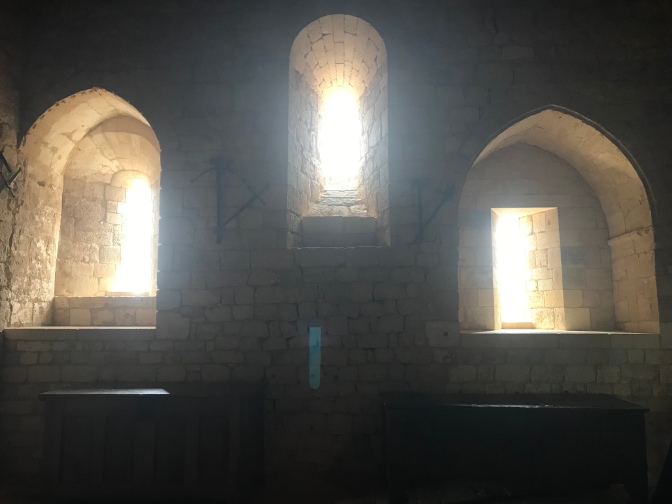 Unlike its French name seems to suggest, this was not a room in which to lock away prisoners but, rather, as a final place of safety when avoiding an enemy invasion. 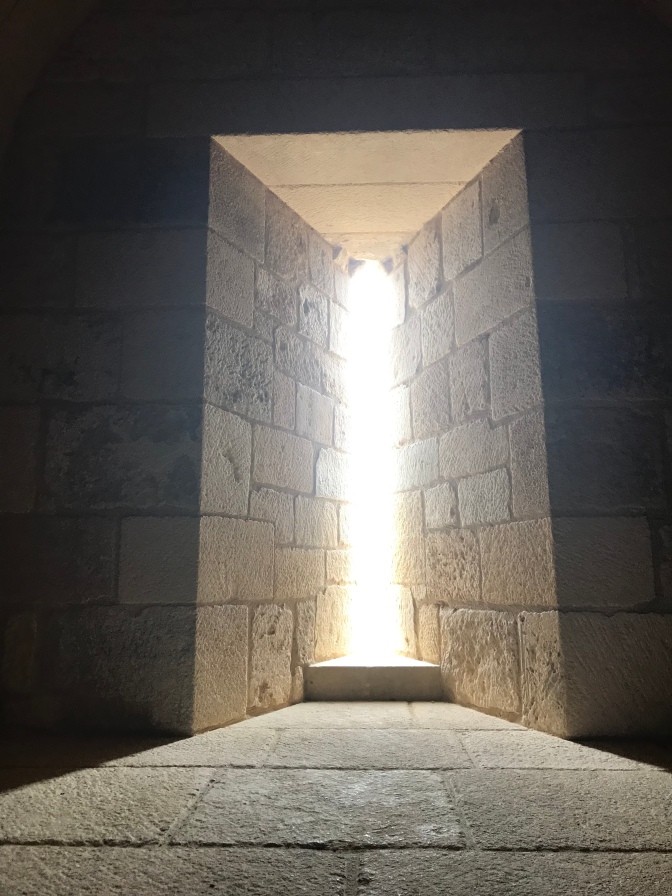 Very narrow slits between the bricks serve as windows. They would have let in enough fresh air and sunlight without giving place to enemy attack. 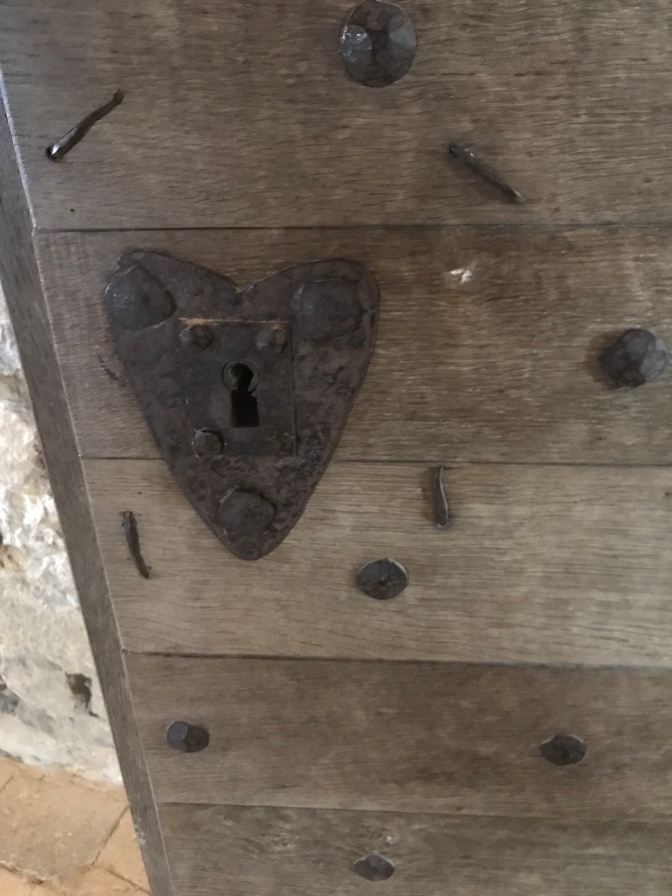 The lock on the door into “Le Donjon”.

An Italian-inspired Renaissance stairwell linked the feudal fortress to the rest of the residence after fending off foes was no longer a primary focus. 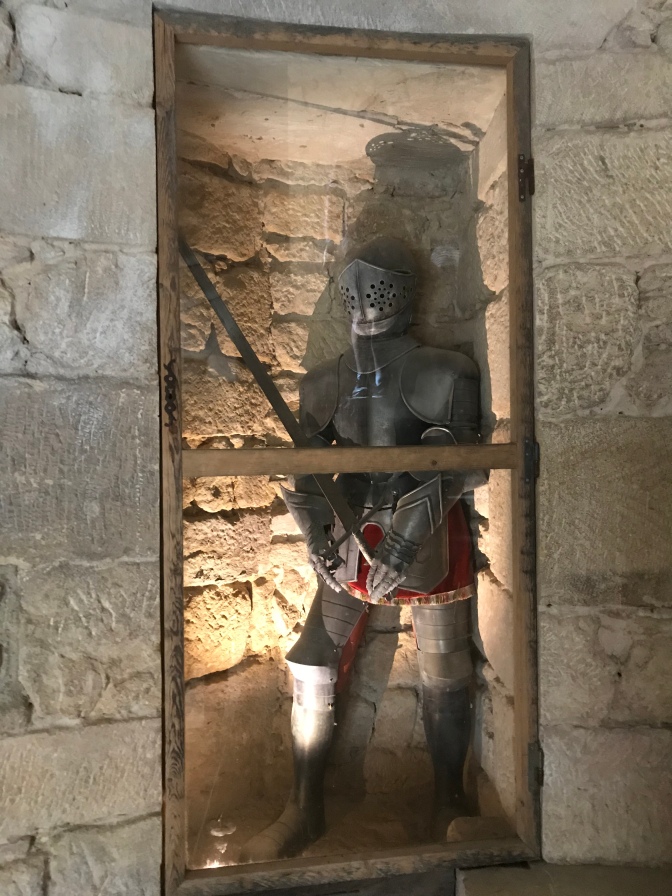 Nowadays a Knight’s armour stands guard and surveys the proceedings.

A circular stairwell lead us up…

to another steep stone stairway… 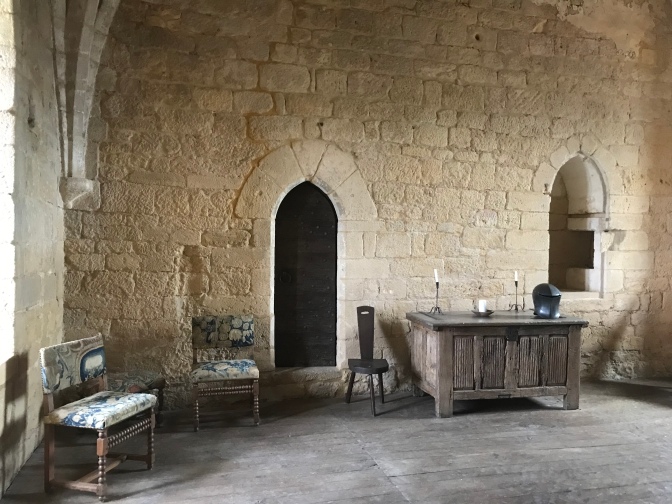 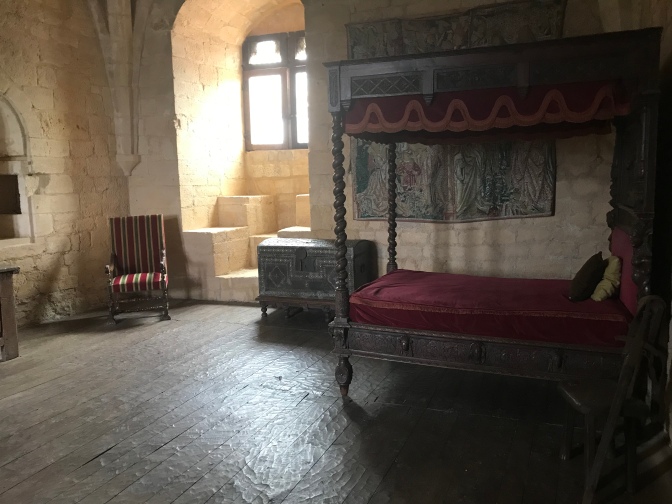 of King Richard 1 (The Lionheart).

Richard’s brother, John succeeded his brother to the throne and famously signed the Magna Carta on the 15th June 1215. It was, simply stated, a bill of rights for the people of England to prevent the aristocratic abuse of power.

The panoramic view atop the spur is absolutely splendid.

The views of the top are equally remarkable.

The spiral staircase is formed around a central pillar. Isn’t the ceiling intricate?

A walk back down the staircase…

lead to a typical door from the Middle Ages…

out into a classical courtyard…

and into “la cuisine” (the kitchen). Notice the hooks hanging from the rafters to keep food off the floor and away from the rats!

it looks really realistic but is made with lights… as are all the lanterns.

Even while dining, thoughts of impending war couldn’t have been far from their thoughts. They had to be prepared at all times. 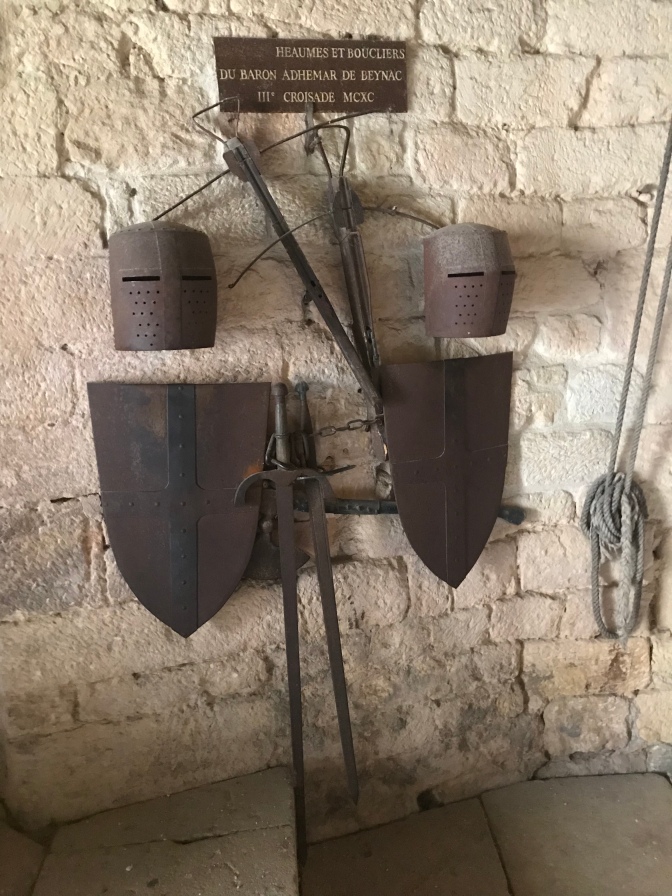 The helmets and shields of Baron Adhemar of Beynac 1190.

Of course their wine, stored in barrels, was readily available to celebrate victories or to drown their sorrows.

Leading directly from the kitchen, is the Barbican. Equipped with a fortified door and a drawbridge, an assailant managing to make his way over the wall would find himself trapped in this small area.

Here he would be afflicted with arrows, rocks and tar from above.

The Barbican had lookout points. Watchmen would see who was advancing and fire at them as they came over the walls. 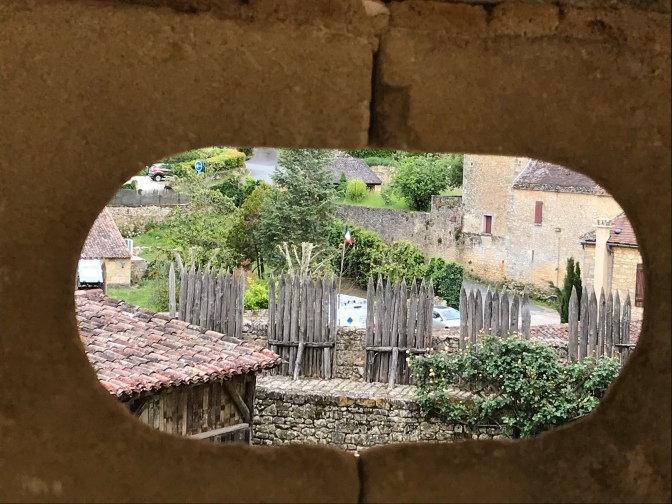 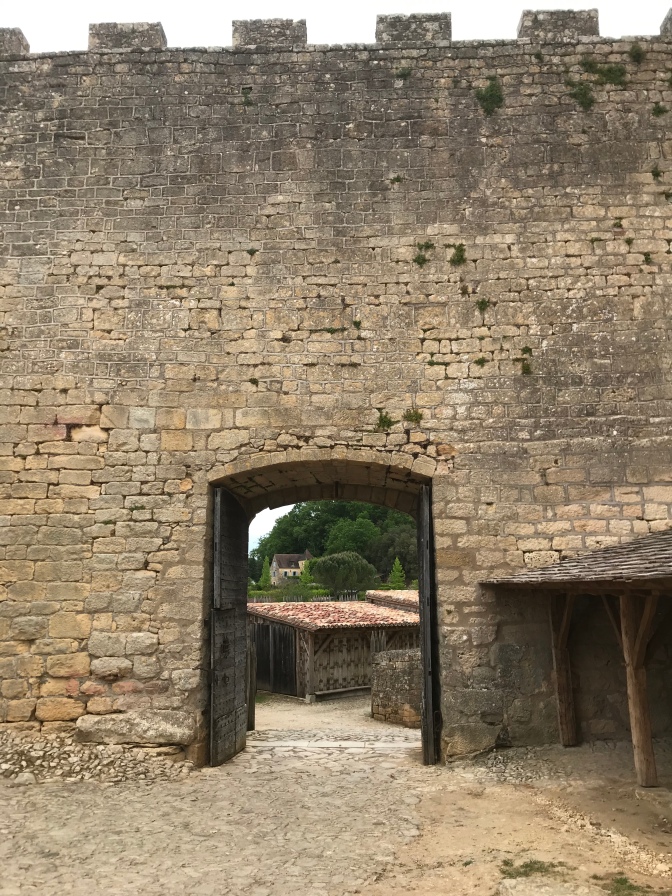 to get to the entrance wall…

And then, also a moat!

With so much beauty and authenticity outside and within;

3 thoughts on “A Day in Beynac Part 2: Château Chaleureux”