From a purely aesthetic point of view, this “jolie ville” (pretty town) it is the “plus belle” (loveliest) so far. When you see the photographs, I’m sure you’ll see why I say this! 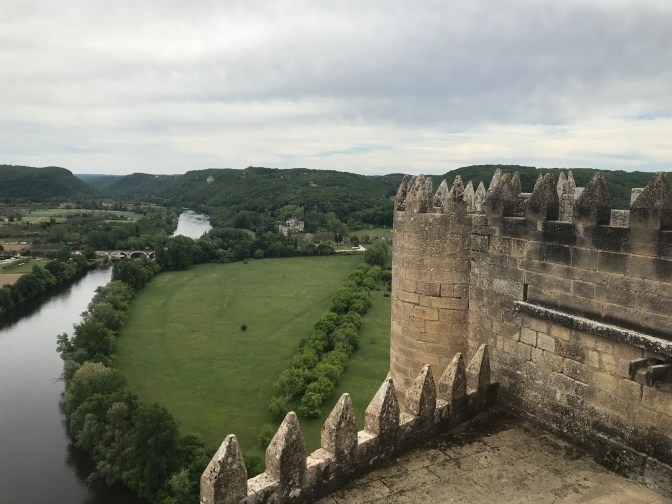 On a hillside, sloping down towards the Dordogne River, lies the town of Beynac with an imposing medieval castle set majestically on a summit, surveying its subjects. 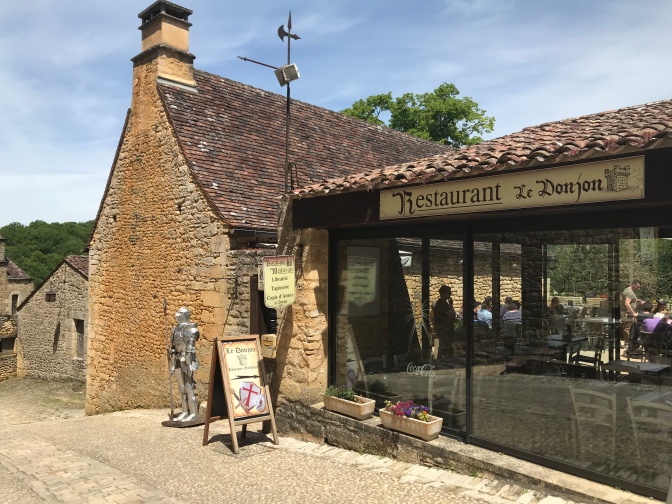 Having had a delicious “dejeuner” (lunch) at Le Donjon, we walked down the old path leading to the “Centre Ville”. 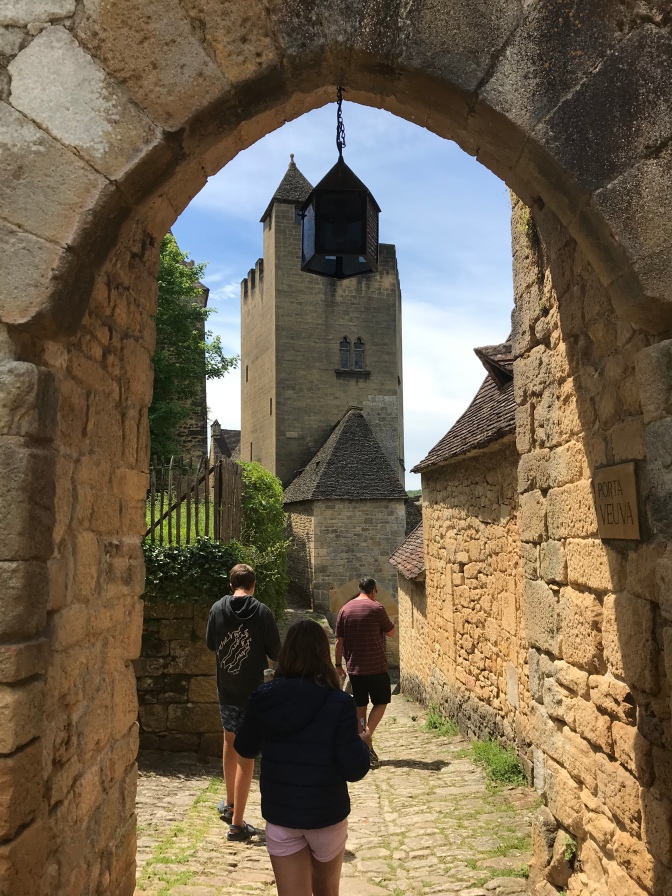 Through the medieval arch of Porta Veuva, we made our way through the narrow stone streets. 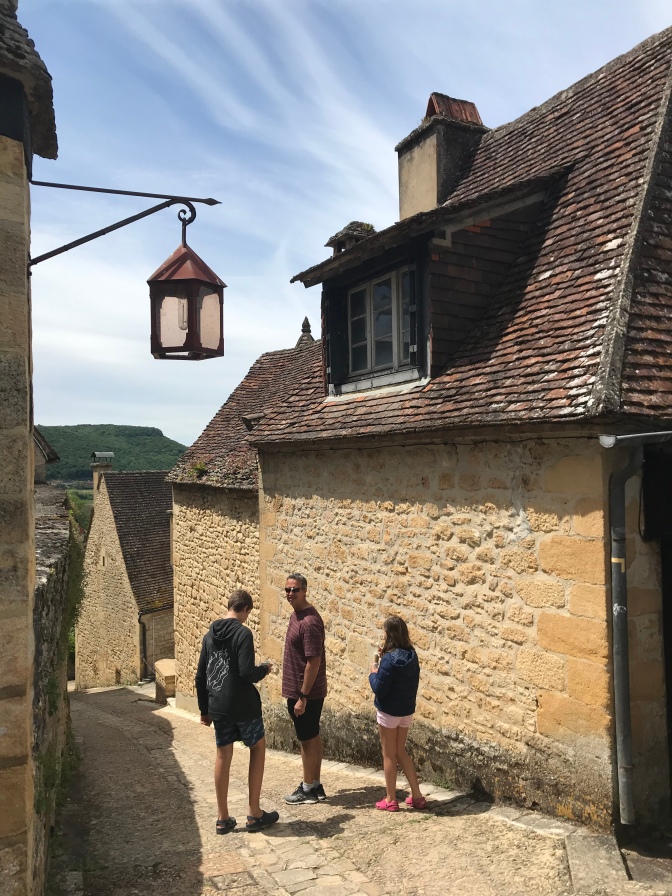 I took hundreds of photographs along the way as each new scene unfolded, revealing more and more quaint architectural delights.

A flawless mergence of nature and manmade structures.

Seamless transcendences so pleasing to the eye.

Stone walls and shale cladding give these homes an air of romance.

Having been restored, renovated and remodelled over the centuries, one wonders what the original dwelling looked like.

A red table cloth, matching the red flowers in the pots on the courtyard wall, is strewn languidly across the little white wrought-iron table. Was it left there accidentally after brunch or purposely for the benefit of bystanders? 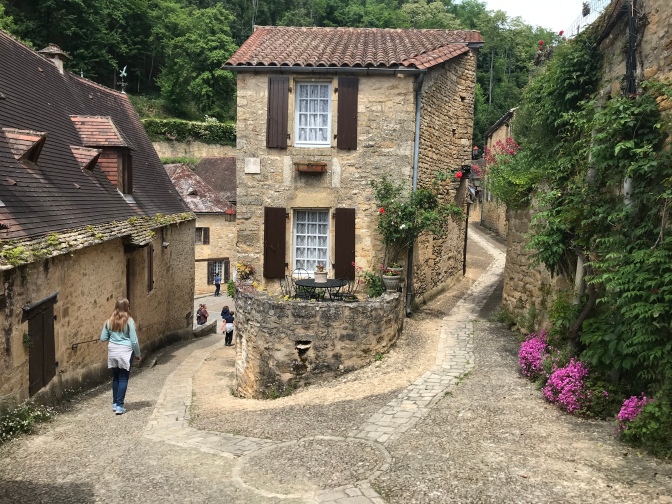 Another interesting space where one can imagine people coming together for evening “apéros”; taking “un petit pause” (short pause) before dinner to “boire un verre” (drink a glass).

A tiny chirp and slight movement, just under her chin, caught her attention.

A disused water fountain remains in place purely for the pleasure of passersby.

Fontaine de la Balme MCMLXX – it seems really ancient but the year that is represented by the Roman Numerals is 1970.

Another example of the interminability of nature. 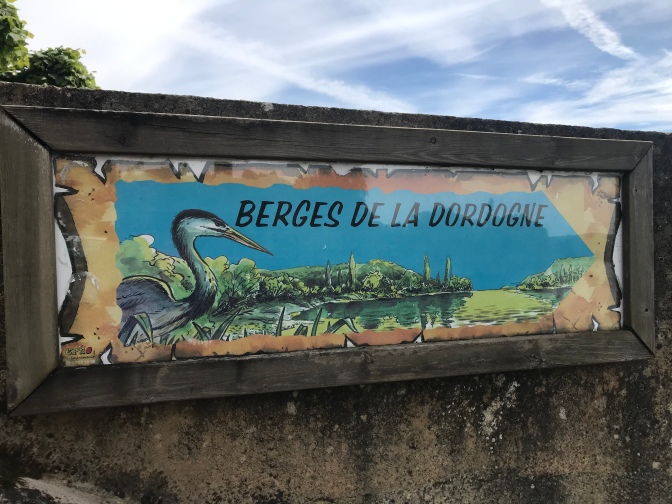 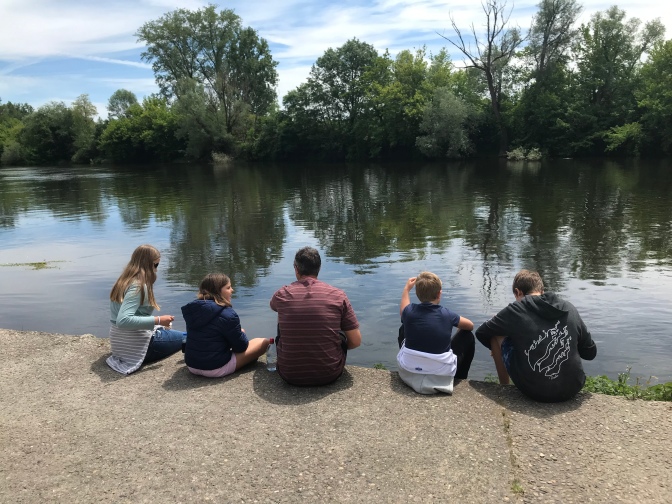 The banks of the Dordogne proved a perfect spot for a pit stop before making our way back up the hillside to visit Château Beynac.

I took photos of three pretty streetscapes: (is streetscape even a word? I s’pose it is).

(From the river looking up towards the castle).

(From across the main road towards the “bureau de poste” (post office)).

(From a local restaurant up towards the cathedral).

We were in for a change of perspective as we trundled up the incline.

Mr B uncovered a cavern under the house at the end of the street. It was hidden behind the bush but he and the children crawled under the foliage to find their way in. There were no secrets to uncover as it was empty but it did lead to a storage room and a door into an adjoining house. A secret lair for clandestine meetings perhaps, or for a smuggling operation of sorts… oh the stories that Enid Blyton could have told about four children and a mysterious concealed cave…

And the doors we discovered! They were adorable!

This one came up to my chin. I love the interesting cross with three dots on each end and also the jouster on his mount carved into the wood.

Wood and metal studs make these doors look like they belong on a castle. 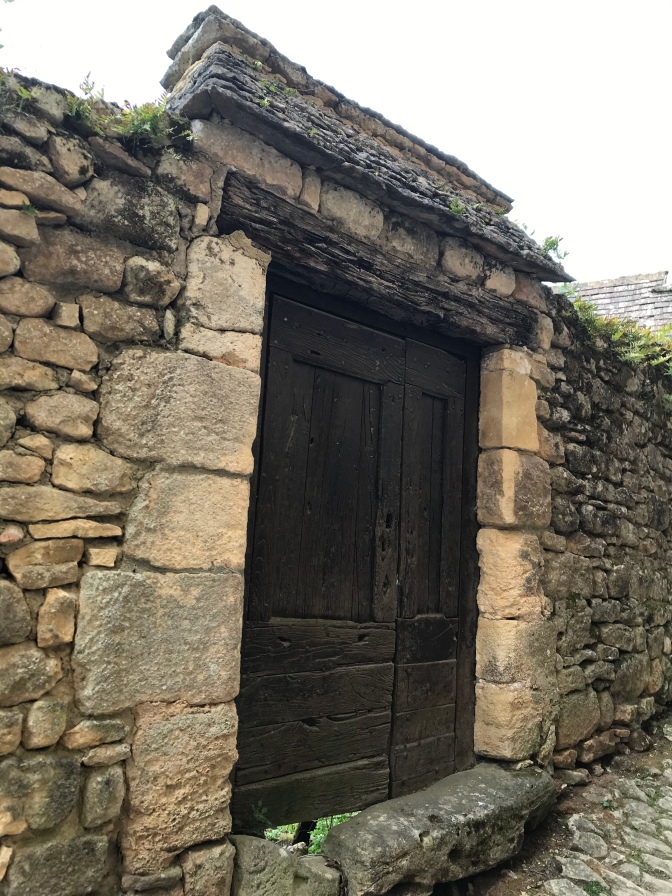 This wooden door into a courtyard was just so gorgeous. I like the little gap at the bottom and the way the thick wooden plank on top has warped to form a semi smile. 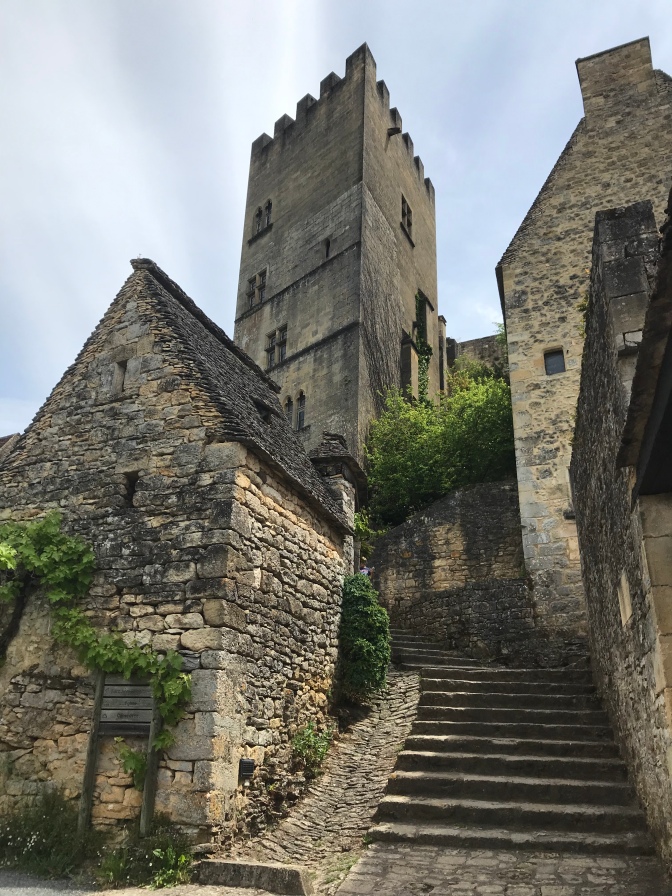 Almost at the top, we encountered these stairs leading to the fortified spur of the formidable feudal “château”.

Just beyond the wall on the right, lay the 7th century monument that has been used in many films including Happily Ever After: A Cinderella Story (1998) and Joan of Arc or “Jeanne d’Arc” (1999). I couldn’t wait to see inside!

4 thoughts on “A Day in Beynac Part 1: Architectural Marvels”