Known as the Venice of Périgord, Brantôme has much to offer in terms of natural beauty and history.

The Centre Ville is located on an Island surrounded by waterways.

“L’abbaye de Brantôme” (the Abbey of Brantôme) consists of a number of troglodytes or cave dwellings. They can be seen in the background of the above picture.

We discovered a water mill reminiscent of the one inside the caverns that was used to grind grain. These caves were inhabited by monks as early as 817BC. However, there is evidence that suggests human occupation since the Neolithic era.

The exterior of the abbey was built during the Middle Ages. The facade was restored in the 1800s but the bell tower has not been changed since it was built.

The way that the bell tower is built seamlessly into the escarpment is a feat of ingenuity! 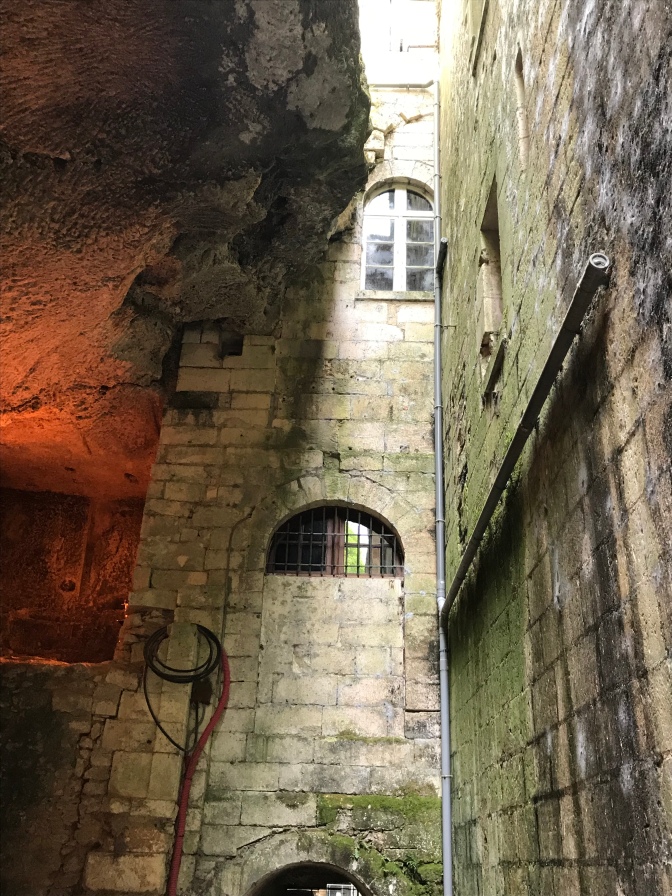 A merging of man and nature where monks would withdraw into the stillness and solitude in order to seek God. 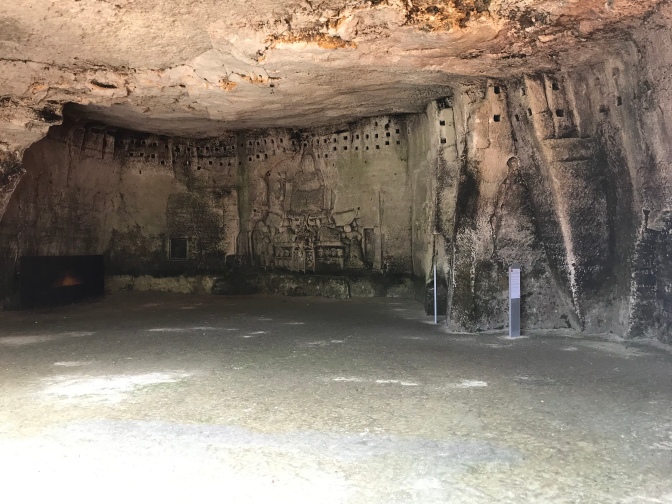 Known as the “Grotte de Jugement dernier” (Last Judgement Cave), there are two depictions on the walls of this chamber:

the first is of “la crucifixion”. Experts believe that this was sculpted in the 17th century. 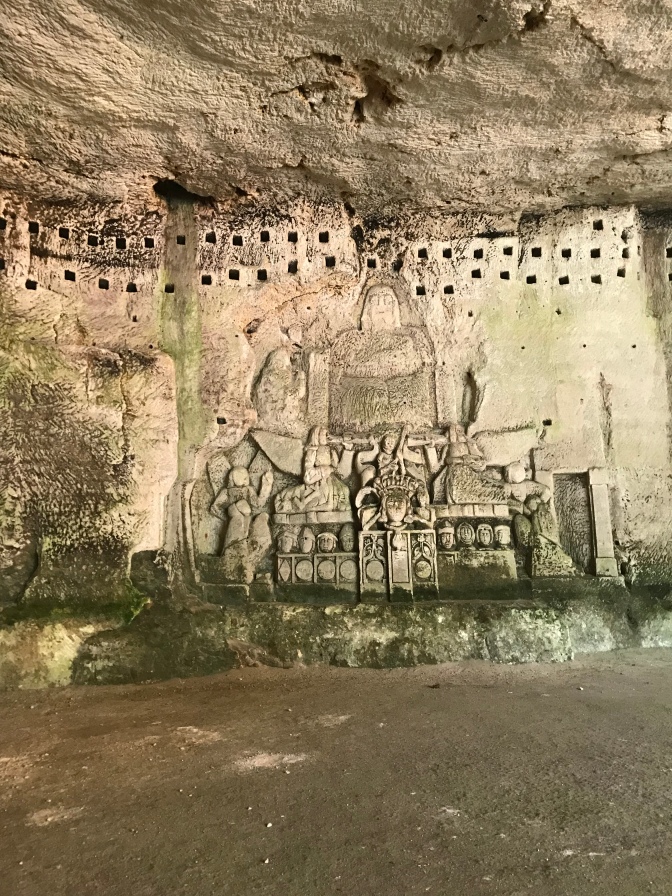 and, the second, the “Jugement dernier” (Last Judgement)

*see the explanation pictured below: 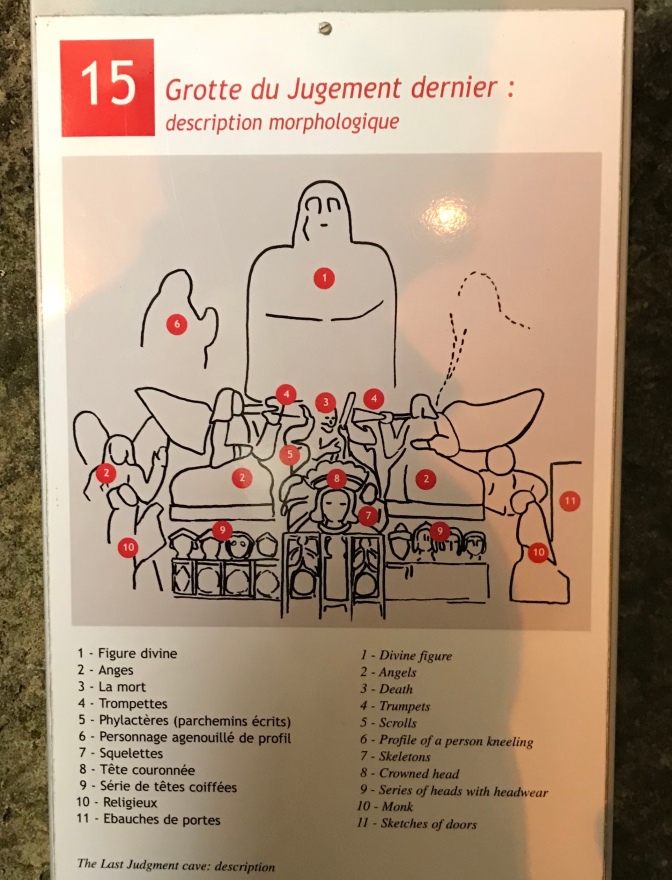 *read about the various interpretations :

Coming out into the open, one glimpses the immortal limestone cliffs and wonders what secrets they hold… 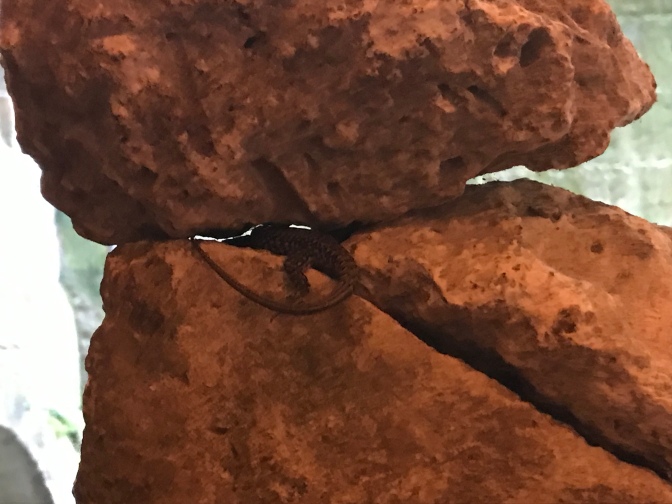 Proverbs 30:28 A lizard can be caught in the hands yet it lives in kings’ palaces.

The St Sicaire fountain was said to be a fountain of holy water with miraculous properties that cured children of diseases, fostered fertility and drew pilgrims from all over…

It was dedicated to one of the Holy Innocents who was put to death by King Herod just after the birth of Christ.

The true fountain, often missed by hurried passers-by, is more humble and less ostentatious. It has been there since before the caves were originally inhabited.

Many artifacts have been discovered in the limestone caverns. It is believed that before the Christian monks came to use the caves, they were used for rituals by Pagans. 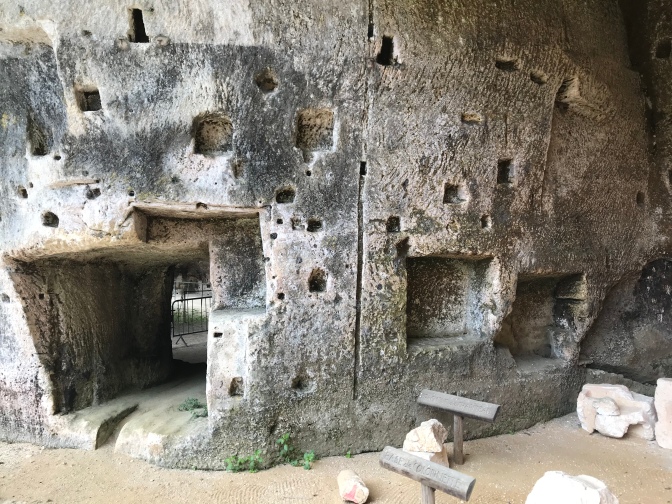 Various nooks and crannies were carved into the walls to serve as shelves. 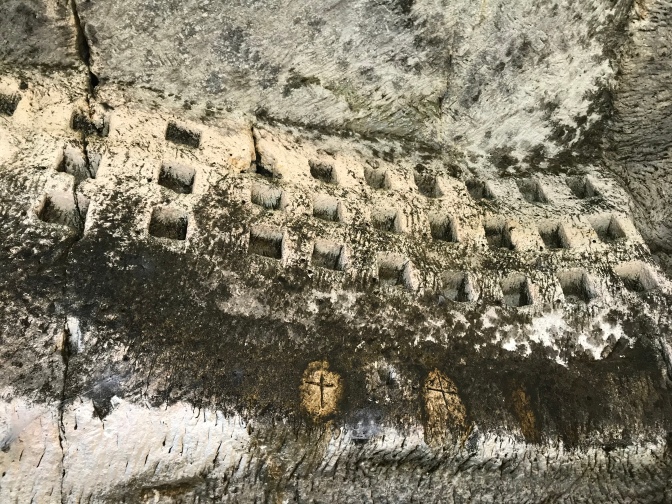 These little cubes housed the monastery’s pigeons. They were used as a source of protein and for fertilising the soil in which fruits and vegetables were grown.

Crosses signifying Christ’s crucifixion are carved into the chalk walls. Monks would remove themselves from society and all its trappings and temptations in order to dedicate themselves to God’s service but they did also have other interests…

The limestone caves which are a constant 13 degrees Celsius all year long, were perfect for the monks who used them as wine cellars and to age their cheeses.

In 1569, during the religious wars between Catholics and Protestants, Pierre Bourdeille (affectionately known as “Brantôme”) though catholic himself, opened up the caves so that Protestants could hide.

This act of kindness has become the town’s standard and its motto is: to be accepting of and gracious to all who cross over its moat. 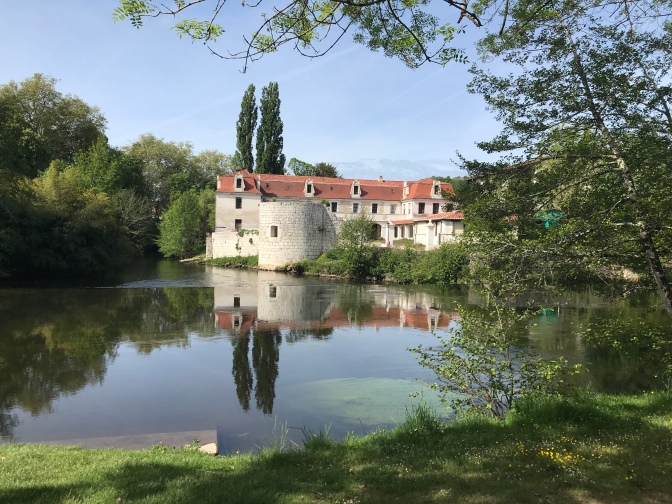 2 thoughts on “Prospecting the Périgord Part 2: Burrowing into Brantôme”