Discovered by a speleological club only 66 years ago, “La Grotte de Villars” (The Cave of Villars) is a phenomenal finding!

Striking stalactites and stalagmites symphonise to form exquisite columns, curtains and chandeliers. Paleolithic paintings, shrouded by layers of calcite, provide some insight into their obscure origins. 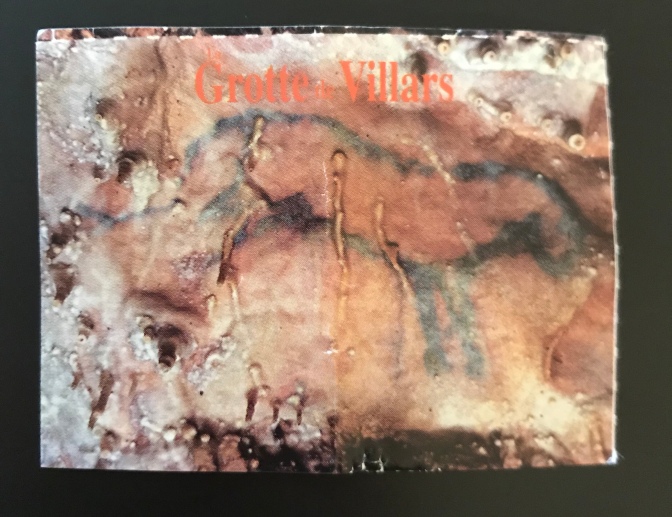 We purchased six tickets for 43€ which included a 20 minute introductory video followed by a 40 minute guided tour. The tour was many in French but the guide did speak a little English and we were given laminated sheets with English explanations.

In order to preserve the caves, it is forbidden to take photographs. Therefore, all the photos in this post (aside from the first one) have been taken from the visitors’ information booklets. 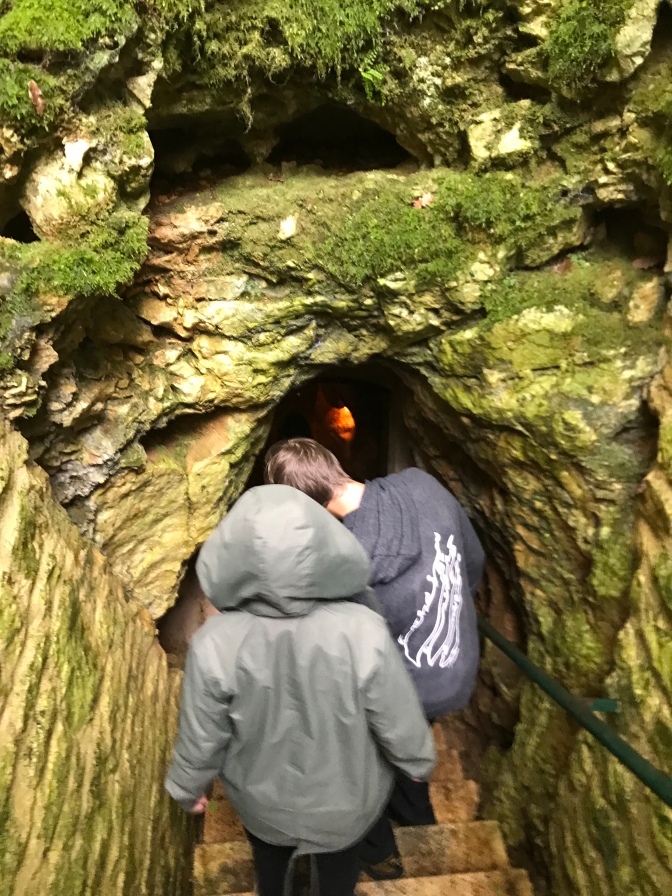 Stepping into this subterranean cavern was like entering into Aladdin’s treasure trove! 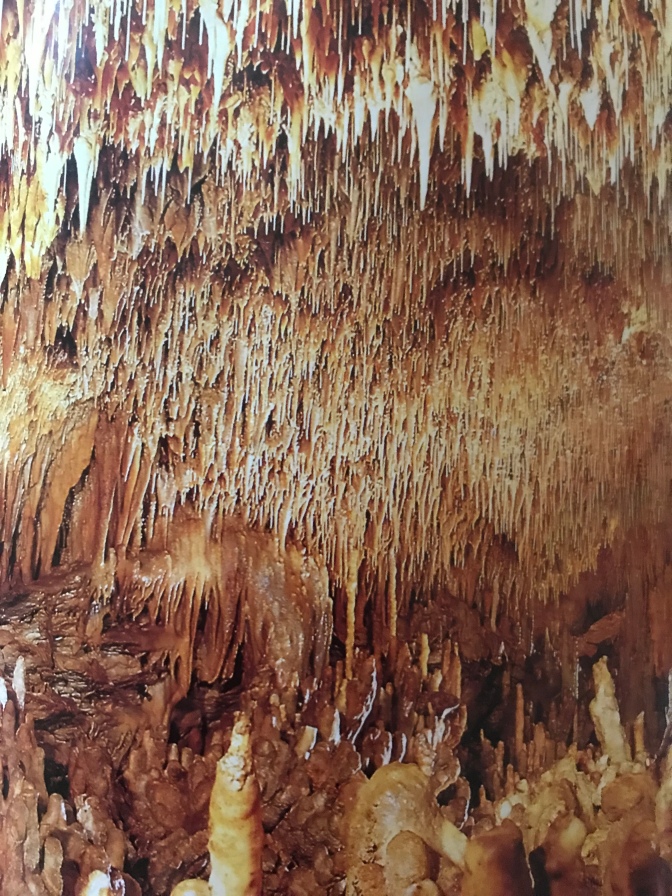 The “salle des peintures” (painting chamber) where one can view the “petit cheval bleu” (little blue horse) pictured on the entrance ticket above.

To me, it looks like thousands of artists with their paintbrushes poised; ready to start creating masterpieces. Isn’t it a marvel that these majestic formations were moulded by millions of drips of water? 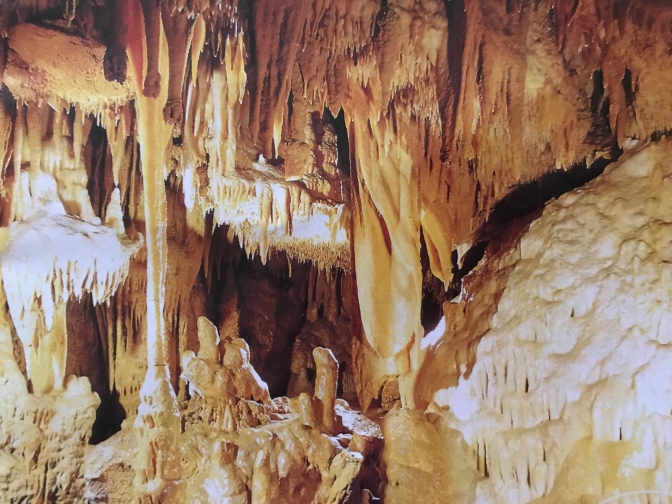 Water mixed with calcium-carbonate, that comes from the limestone rocks above, forms these upward-reaching stalagmites and downward-facing stalactites. Where they meet, conglomerations are sculpted; more spectacular than could be created by any earthly craftsman. 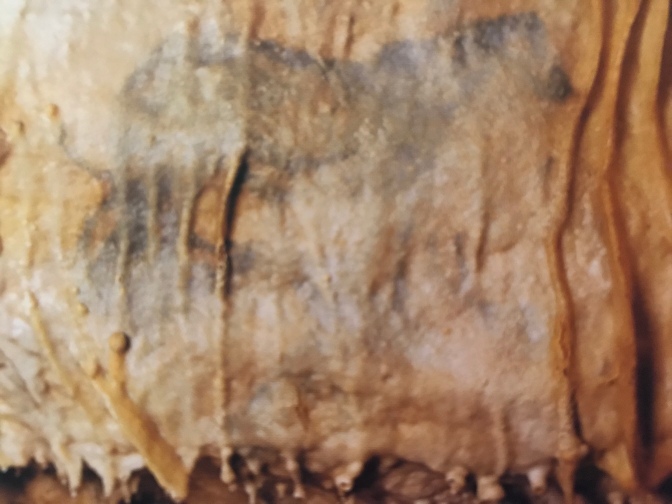 In the picture above, an image resembling a horse can clearly be seen. It is believed that the ancient artist used a medium of ochre mixed with charcoal. Originally black, the painting has now achieved a bluish hue due to the layers of calcium-carbonate (calcite) on top of it … a chemical reaction! 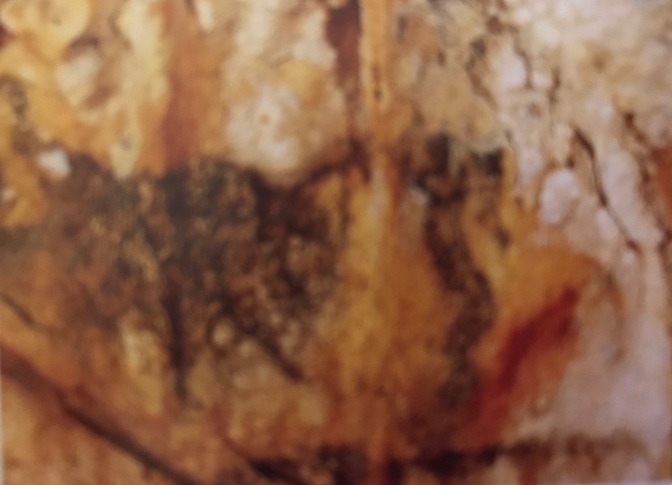 Paintings of humans in cave art is very rare. Apparently there are only two in the world that have been unearthed to date! One is the one pictured above, here in Villars and the other in nearby Lascaux. In the painting, it looks like there is a duel going on: buffalo vs human. Is the human standing and fighting or trying to run away? I can see both perspectives. How about you? 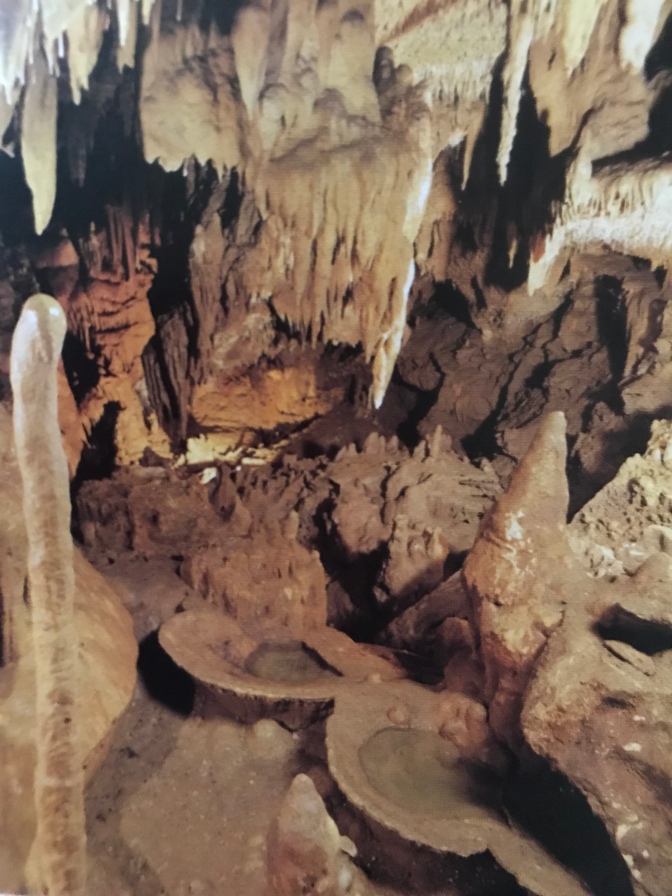 The “salle des bénitiers” (hall of clams) is also know as the “chambre des fonts baptismaux”. Do you see why?

This type of formation occurs when the calcite from above drops into a pool of water and is held in suspension until it hardens and forms a shelf.

Most of the walls of the cave have been covered by the continuous flow of calcite. There is one area in the cave where a large shelf (like the one pictured above) has protected the wall beneath it from being concealed. The scratch marks of a now extinct bear URSUS SPELEAUS can clearly be seen. These bears would seek shelter in caves to hibernate in winter and, in spring, to bear their young – tiny baby bear scratch marks alongside the big ones attested to this.

Back outside in open air, it was time to explore more about the prehistoric animals that once roamed the area… and some that still exist today. 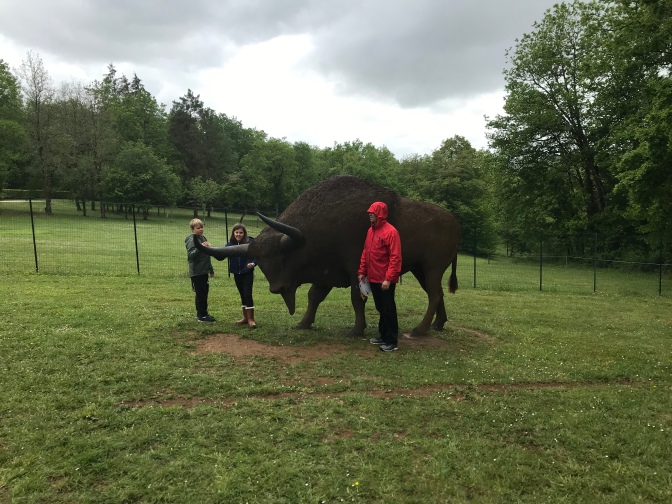 No one wanted to do battle with this beast! 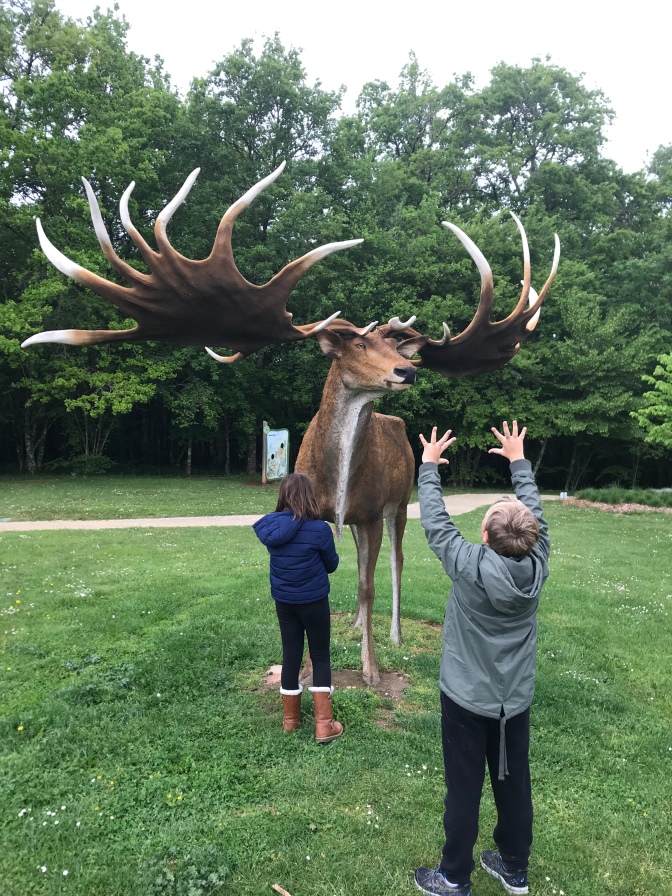 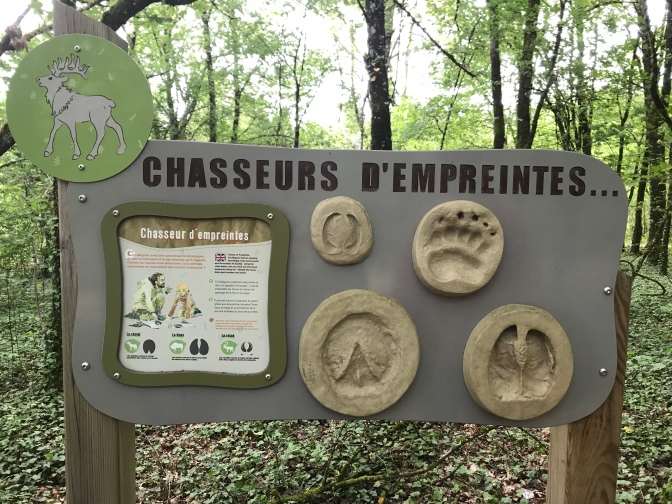 Look at the size of these olden-day footprints! (Clockwise from 2 o’clock – lion, bison, horse, reindeer). 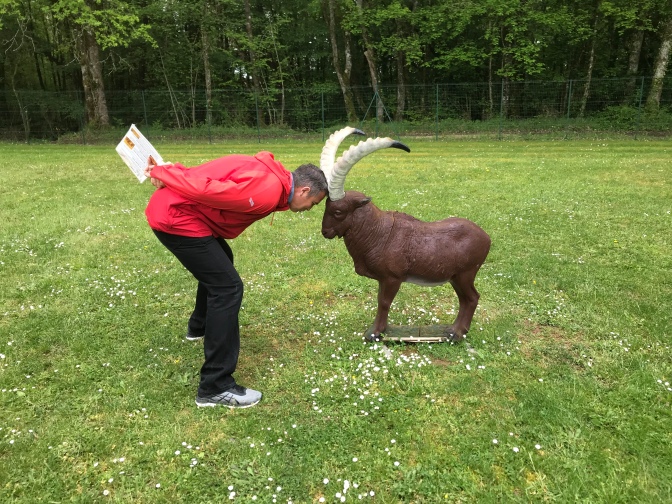 Pick on someone your own size!! 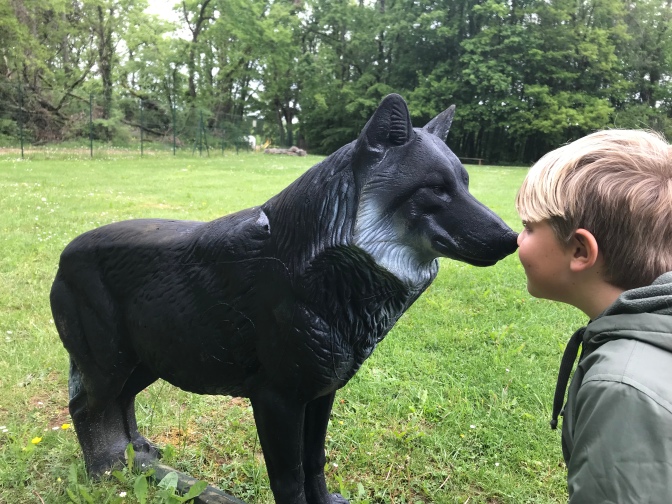 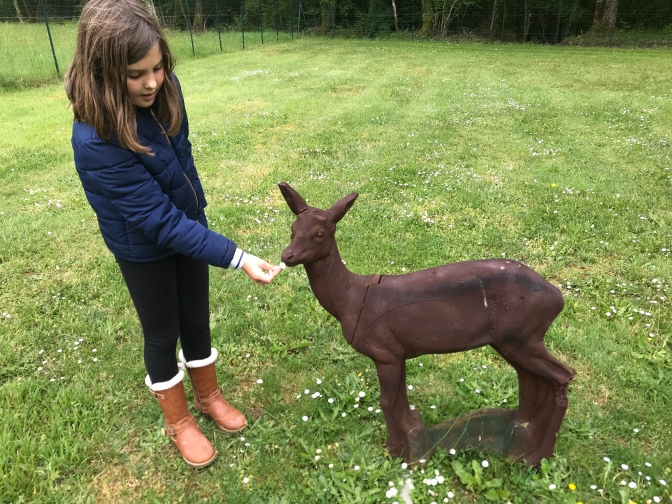 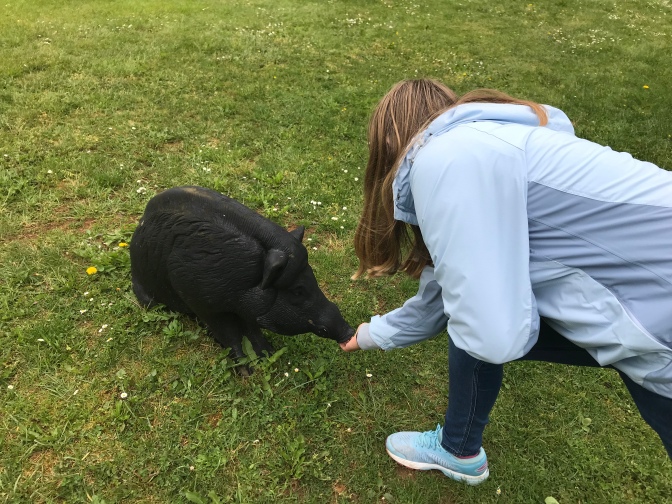 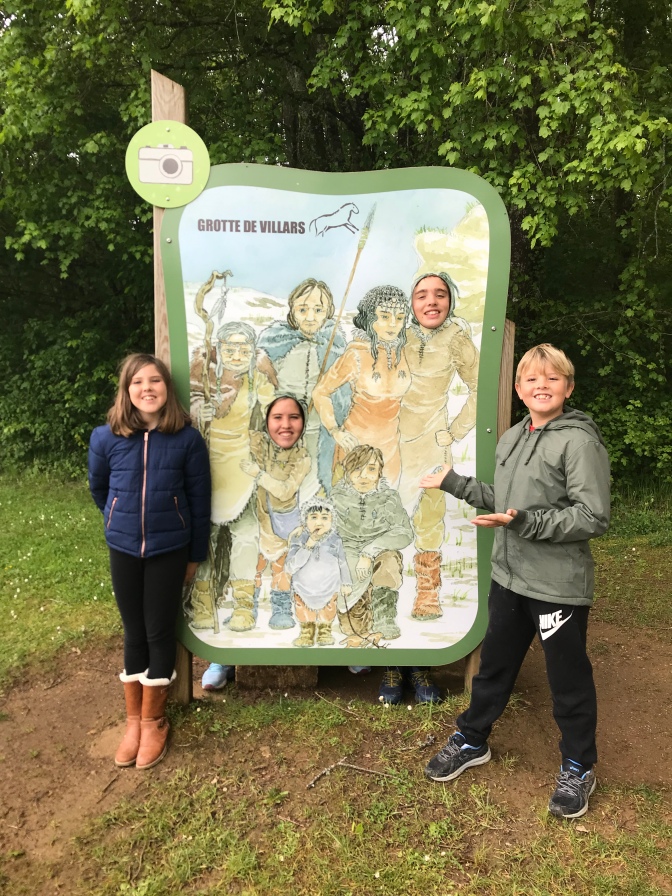 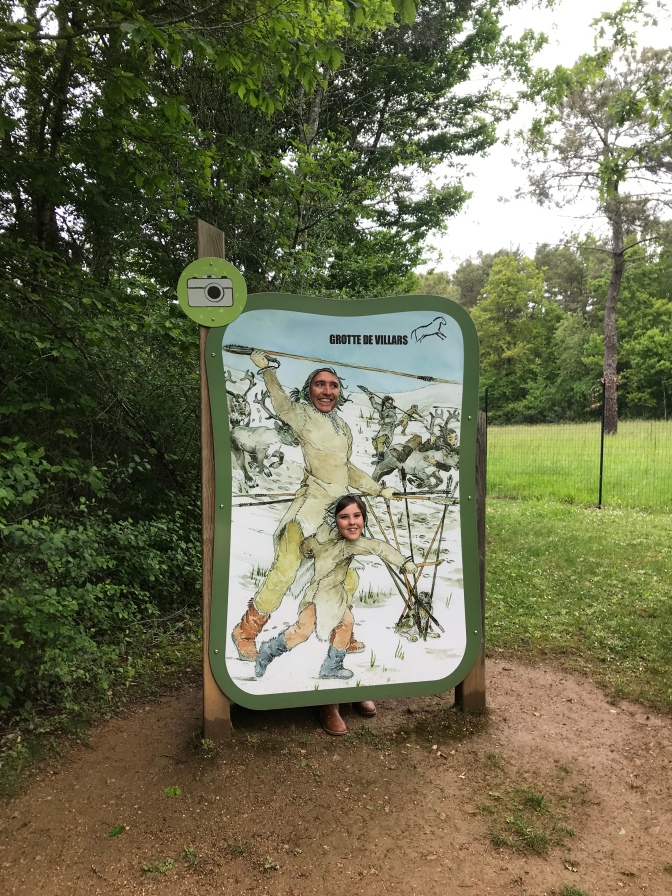 Family life: Mr gets the food going while Mrs tends to the baby.

By now it had started raining so we waved bye-bye and went of in search of some shelter of our own.

In the very small village of Villars, we found another hidden gem: Le Pas de Chat. 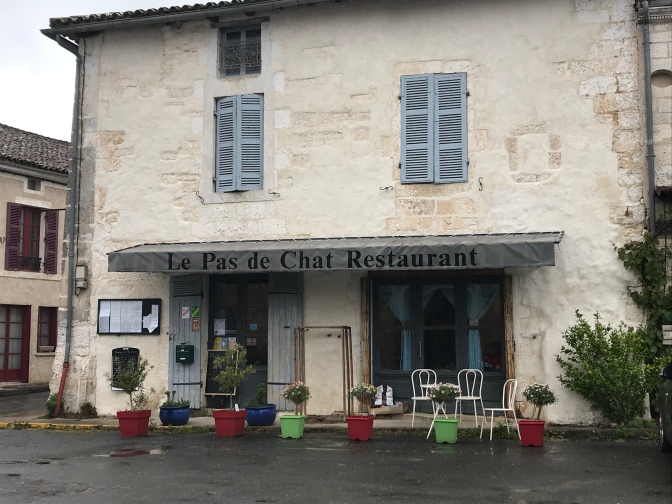 One of four restaurants (I was surprised there was even one!) this one is rated as the best on TripAdvisor. It didn’t disappoint! 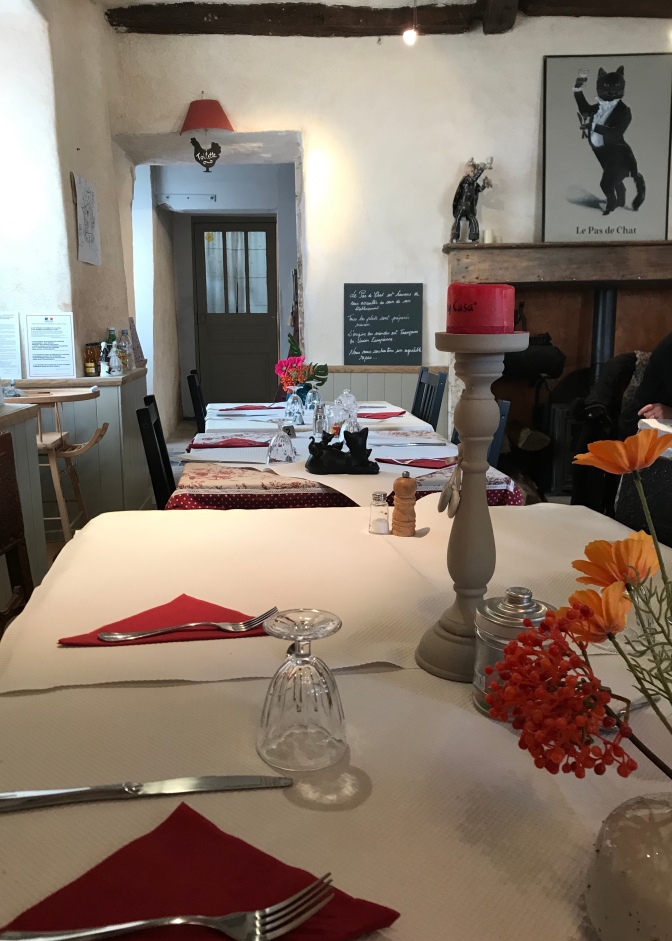 The atmosphere was warm, welcoming and cheerful on this grey, rainy day. 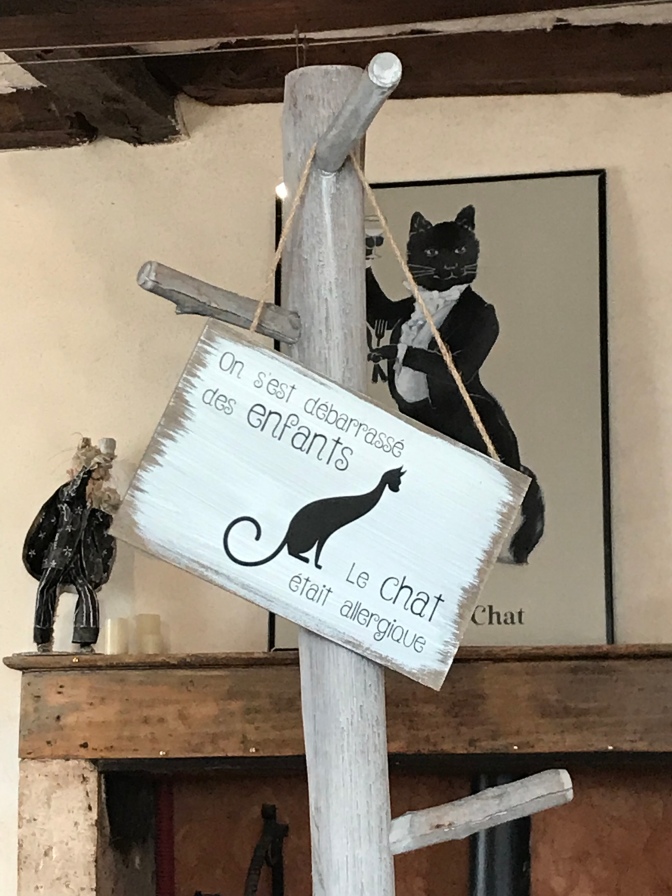 We got rid of the children. The cat was allergic 😸 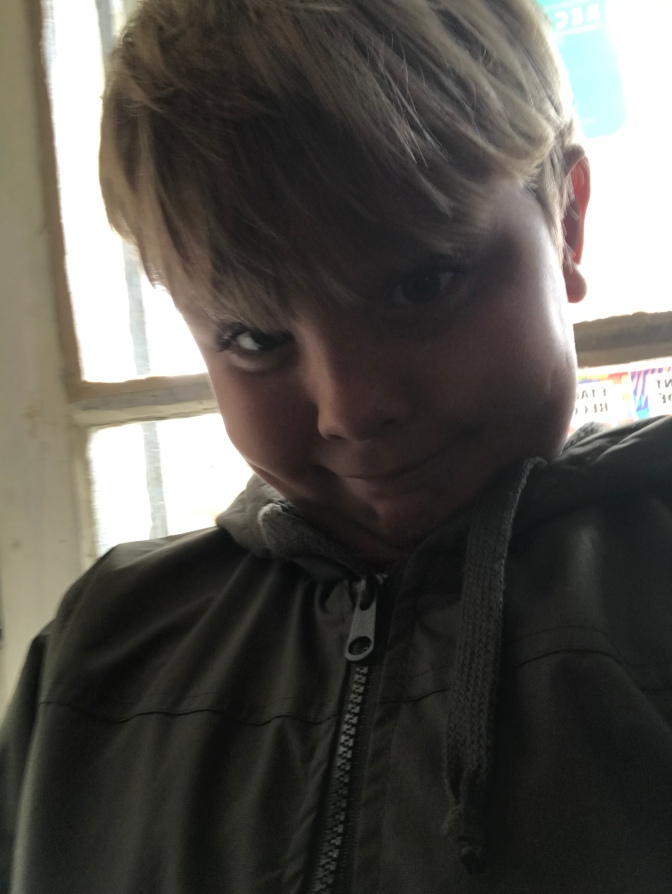 There were two “menus du jour” (menus of the day) to choose from and nothing à la carte. We all chose the same one: 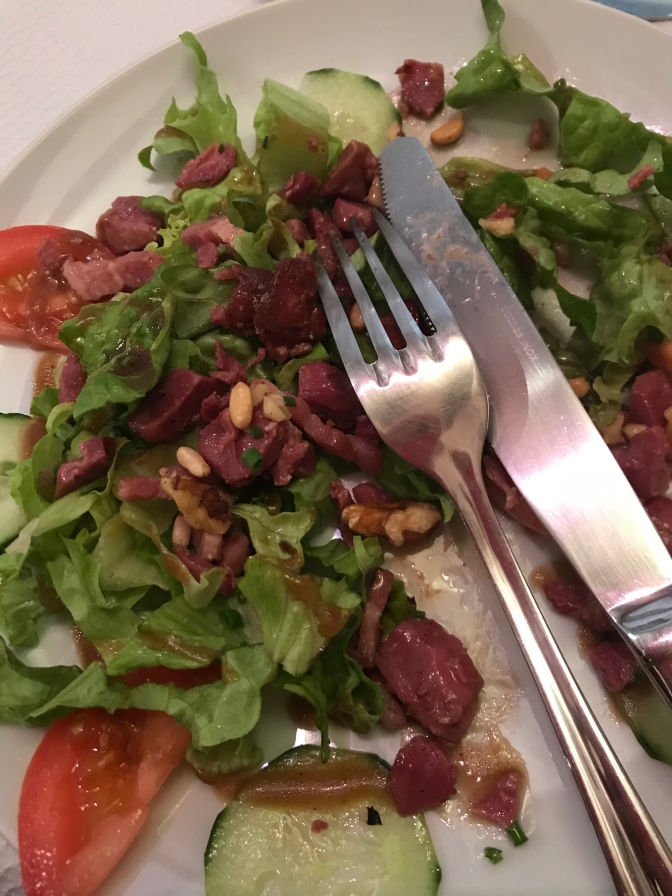 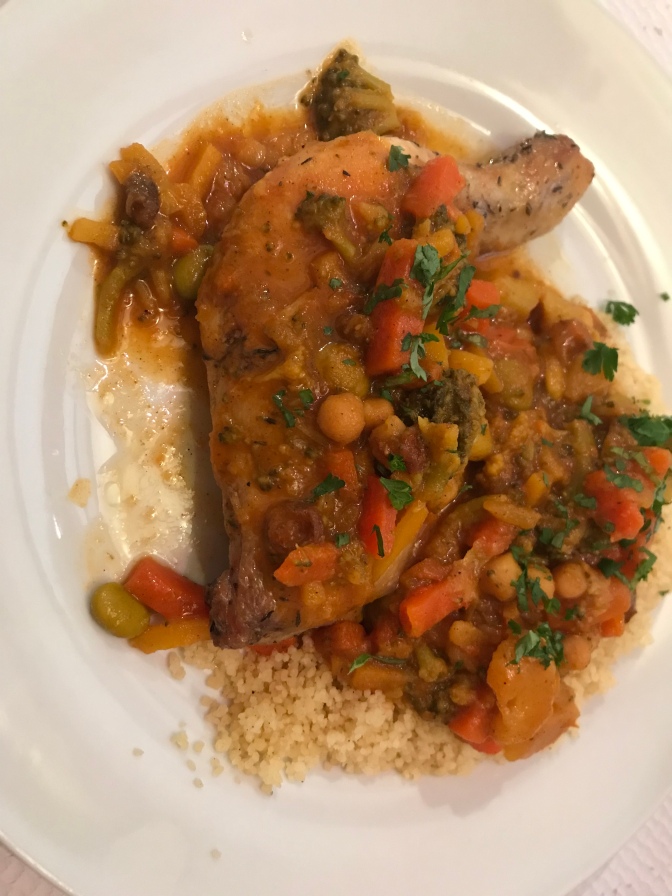 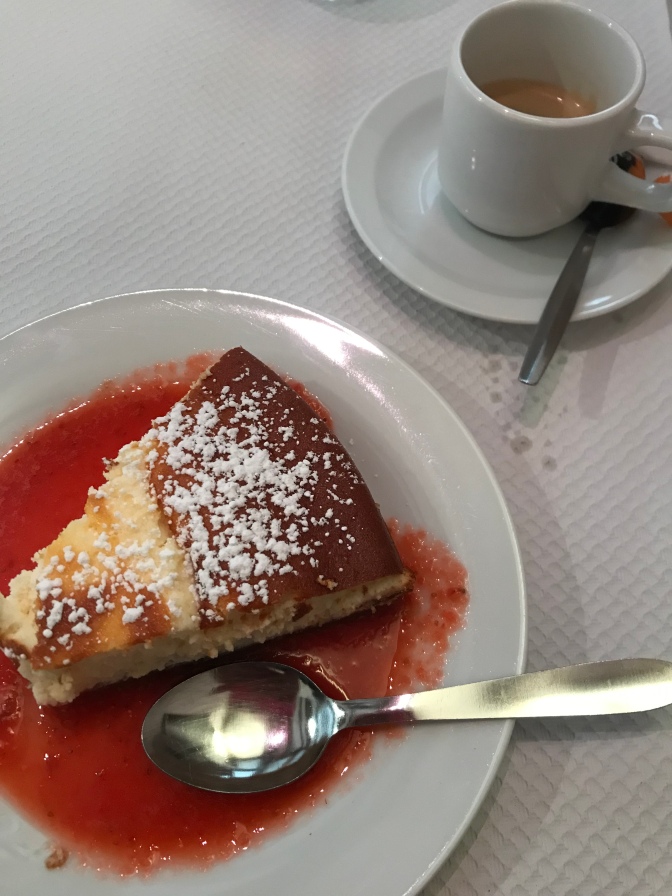 It was a delicious lunch and the best meal we’ve had in the six weeks we’ve been in France!

It really was the cat’s whiskers!! 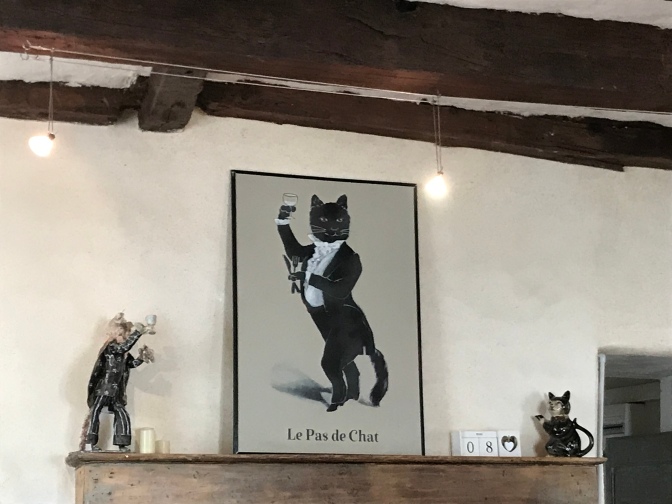