Guided through the vibrant streets of Paris by our indispensable GPS lady, we reached our apartment in the 5th arrondissement at 8:30pm on Wednesday the 10th of April. 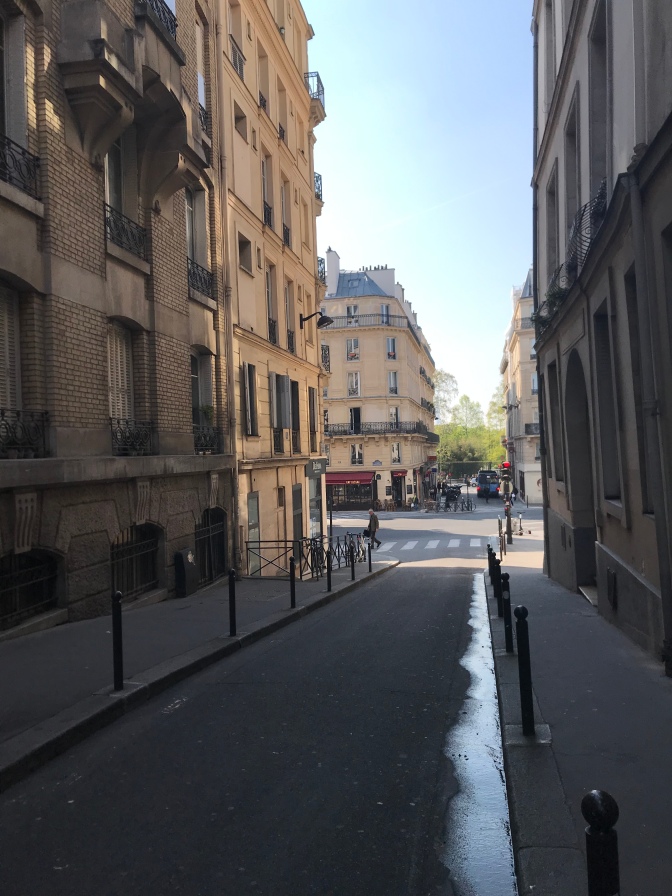 Situated in a tiny one-way street, there was no way we could stop to offload our bags. We drove around for about 15 minutes and finally found a parking spot half-a-km away. It was a tight squeeze but Mr B managed to manoeuvre our over-sized vehicle into the very small space with centimetres to spare.

We went to the parking meter to pay but read, in French, that it was free between 8pm and 7am. To check ourselves, we read the English: “Parking Free Between 8pm and 9am … hmm what to do now? … wake up at 6.45 to feed the meter or “faire une grasse matinée” (to make a fat morning … literally to sleep in) until 8.45. The latter option sounded so much better but I trusted my French enough to know that sept is seven and nine would be neuf!

We were all worn out completely after two consecutive days at Disneyland so we needed to the apartment as quickly as possible. Schlepping our suitcases half-a-kilometre, we passed people patronising trendy bars and restaurants. “Pardon”. Pardon”. “Pardon”. “Excusez-moi”. We pulled 3-months worth of luggage through the streets of “Le Quartier Latin”; near Luxembourg Gardens and Paris’ famous “université”, Sorbonne. 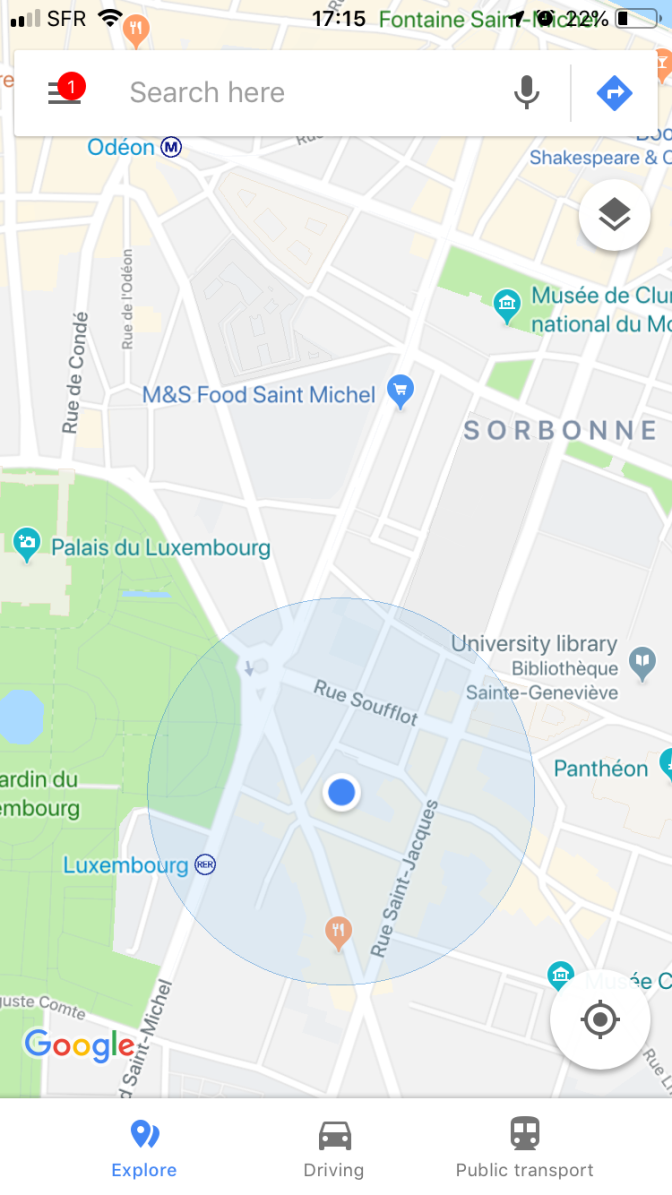 We found the apartment and, using the secret entry codes, spy-fully let ourselves in. We tiptoed through the foyer and whispered in the courtyard, having been asked not to ‘make noise’ after 8pm. Later that evening a local “jeu de foot” (football game) on the telly kept us awake until well after midnight with our “voisins” (neighbours) cheering on their favourites. Gauging by the guttural grunts of approval and hearty guffaws afterwards, I’d say the “meilleure équipe” (best team) won.

Meanwhile, we settled in to our “petit nid” (little nest) in the “couer” (heart) of Paris. 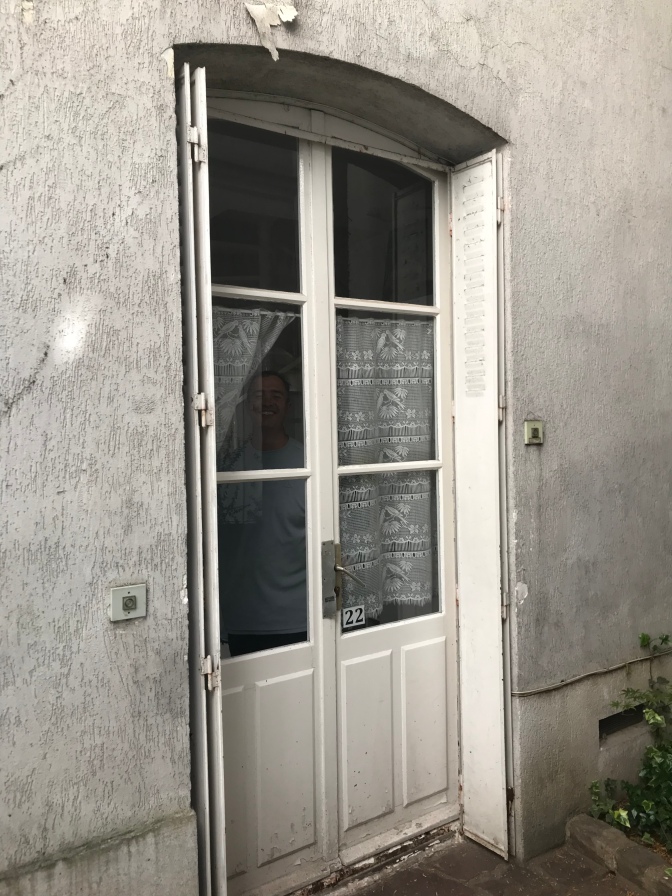 Our offspring reminded us that we hadn’t eaten for six hours. Mr B and I escaped their chirps and went in search of food. It was now close to 10pm but the city showed no signs of sleeping. We found a superette just up the street and bought “des pâtes” (no, that’s pasta, not pâté!) and “du jambon” (ham) to make a simple Alfredo to feed our fledglings.

The “sympa” (friendly) shopkeeper’s advice saved us from being towed!! He assured us that the correct time to collect our van was indeed 7am. There was a police department dedicated solely to monitoring parking and to authorise illegally parked vehicles to be impounded. He assured us there was appropriate underground parking, just down the road to the right of the store. He wrote down the name for us: “Vinci Indigo”. Well we’d just have to be up “tôt” early the next morning!

We returned to our cozy nook and “nos enfants” (our children). Mr D had nodded off while we were out. With only a tiny two-plate stove, cooking was a challenge! There was a microwave/convection oven in the kitchen but it came with no instructions and the ink on the buttons had worn off so we had no idea how to use it! Finally, just before 11pm we had food on the table. Mr D would not be woken so we left him to sleep. 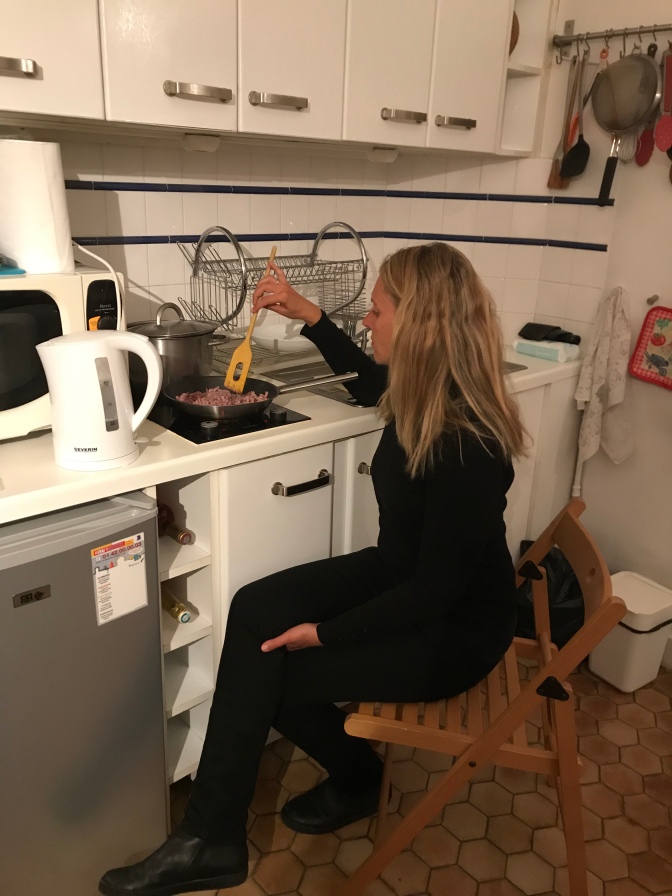 At 6.30am Brent and I went to move the car. We told our sleeping children that we’d be gone for about 10 minutes. I had rolled out of bed, put on my clothes from the day before and covered myself with my warmest jacket. Expecting to jump back into bed as soon as we returned, I hadn’t showered and didn’t even brush my hair nor my teeth!!

When we arrived at the underground parking, we immediately noticed that the height restriction was 1.9m. Now, we knew from a previous incident that our car would not fit under the beams. Not wanting to repeat the experience of having to reverse out with three cars backed up behind us, we had to look for other options. The parking attendant advised us to search online for parking in Paris for vehicles up to 1.95m … who would’ve thought that an extra 5cm could’ve posed such a big problem!

There was one parking garage, 8km away, that would accommodate our car. It was a 27 minute drive through peak time Paris traffic which was … interesting to say the least! At that point we made a decision to ditch the car for the week and to rely on public transport and our own twelve feet.

On arrival at the parking garage, we were instructed that wouldn’t be admitted in until we had booked online. The attendant in his office, with his computer, would not be able to help us with this! Thankfully Mr B had data so we booked the car in for the week for 70€ (about R1000 – cheaper than the Cape Town International Airport!) and caught an Uber back to our apartment. What would we do without technology!

Ironically, on the way back to the apartment, our Uber driver told us that it’s still very popular and fashionable to go to the cinema to see a “film” (movie). You have to be there 30 to 45 minutes before to book tickets because it’s not possible to reserve seats online!

We arrived back 90 minutes later to our bleary-eyed brood asking what was for breakfast. 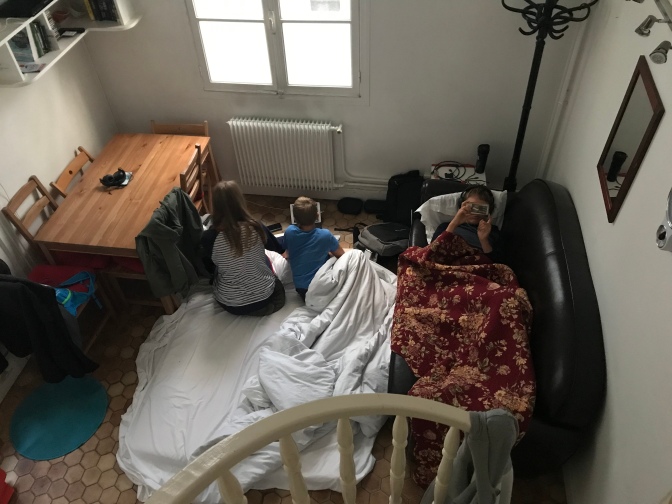