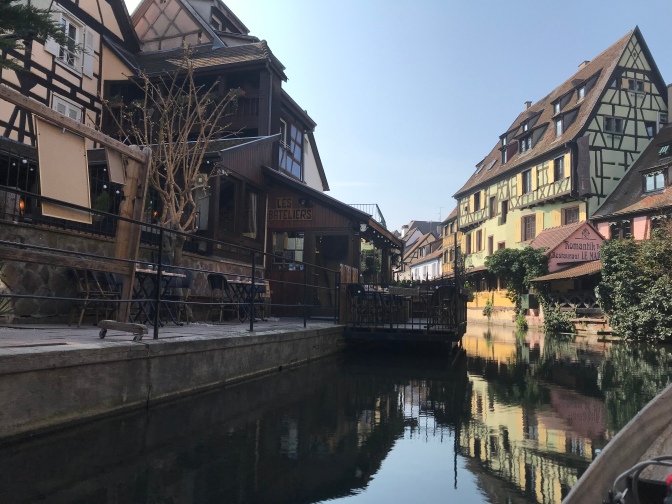 Colmar is known as “La Petite Venise” (Little Venice). We took a guided boat tour to discover more about this beautiful town.

It was founded in the 9th Century and was built along the waterway because it made trading easy. 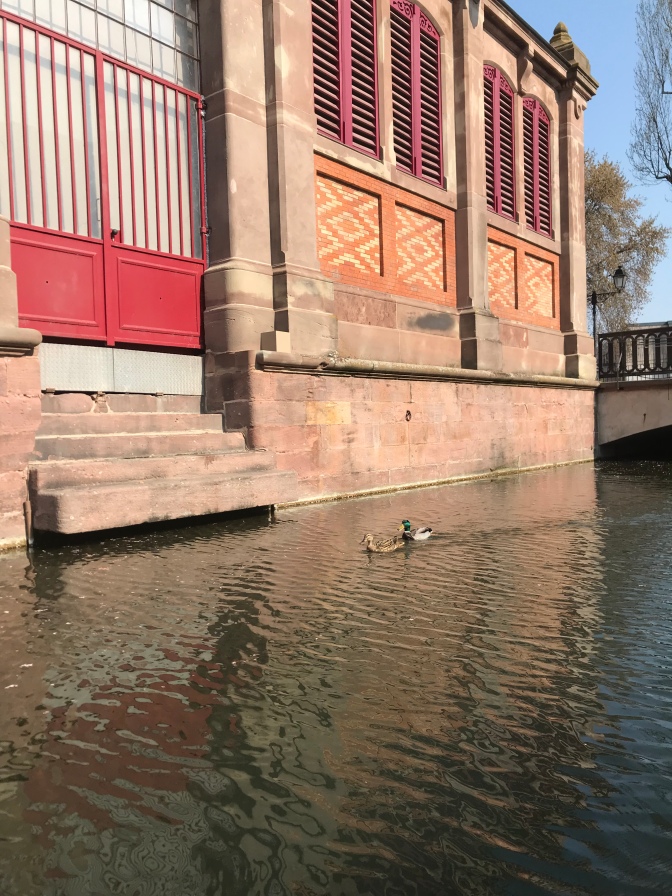 This market is still operational but closed on Mondays. 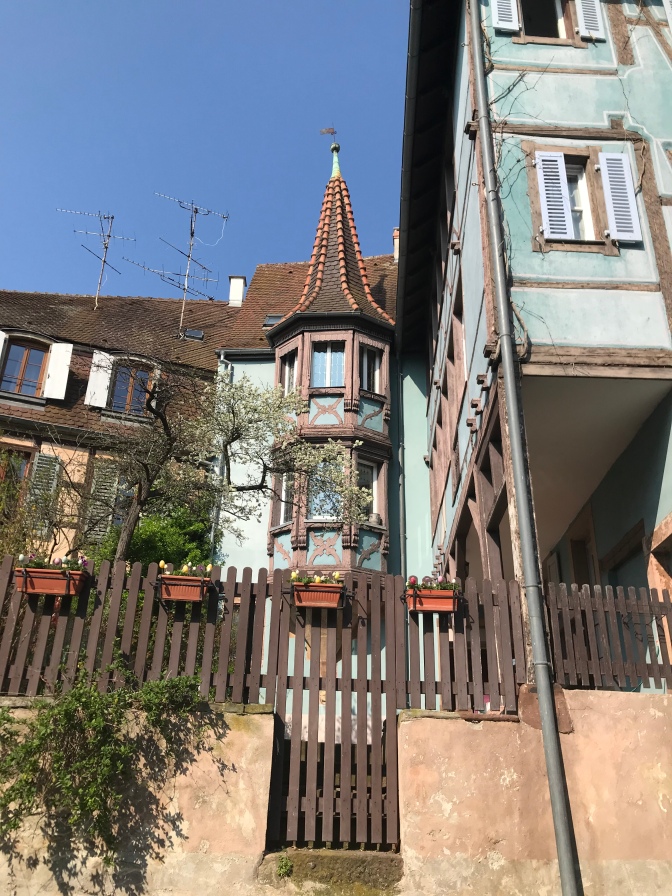 Residents paid taxes according to the square meterage of the floor plan so cunning builders devised a plan to create protruding turrets to provide additional space without having to pay more. (See the turret in the photo above).

Incidentally, the toilets were also built in this fashion, but for a different reason: with a flat platform and a hole in the middle, people would do their business, it was deposited directly into the river and washed away. For this reason, bathing and laundry was done on the side of town where the river flowed in and not out! 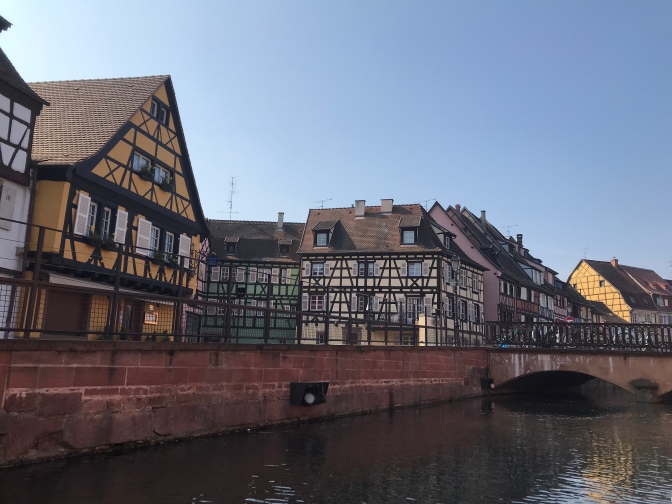 The town wasn’t always this brightly painted. King Louis XIV (14) conquered France in 1673 and decreed that all homes owned by Catholics be painted blue and all those owned by Protestants, red. Eventually the Protestants rebelled and painted their houses any colour they wanted. There is still a law in Colmar today that states that your house may not be painted the same colour as your neighbour’s. 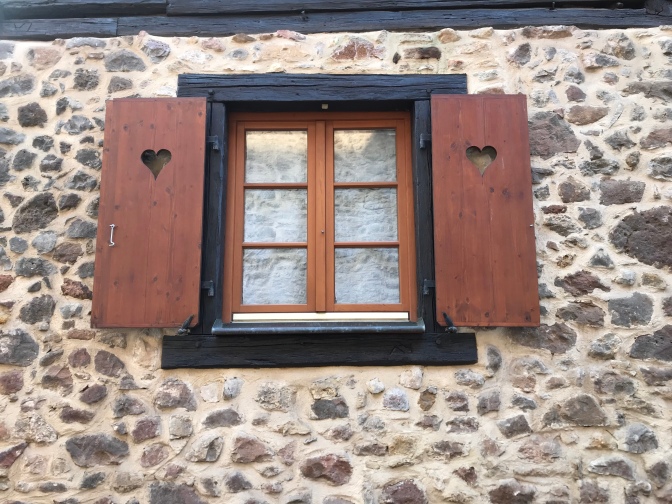 Fathers who had daughters who had come of age would advertise their eligibility by carving hearts into their shutters. Suitors, seeing the sign, would meet with the father to decide on their worthiness as husbands. This usually depended on their wealth as they had to pay a dowry. Once the couple was happily married, the hearts would be turned into different shapes that symbolised fertility, love and long-life for the pair. 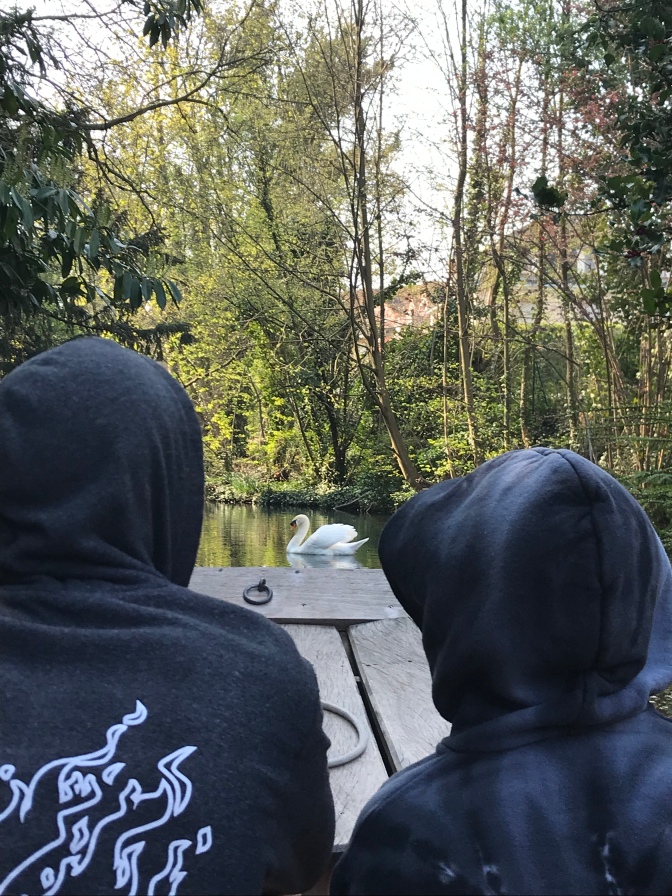 Ahead of us, we caught a glimpse of a graceful “cygne”. Our guide warned us to be careful of him because he was fiercely guarding his mate and their nest and would not let anyone get close. This dapper defender intercepted us 50m before we reached the little stream that led to his princess about 50m away where we passed by. He periodically attacked our boat as he escorted us for a total of 500m up the river and back down again; stopping only when he knew he was well and truly rid of us! One thought on “Colourful Colmar”